To some developers, though, every instance where Facebook gives its own apps a special advantage seems like a subjective move that contradicts the platform’s founding philosophy.

Rule changes aren’t the only thing that rub. This summer, Facebook announced a new program called Great Apps, and another called Verified Apps. The programs are intended to reward apps that Facebook considers exemplary. Great Apps get special benefits. They receive more prominence in news feeds than other apps, for example, and can have users send and receive more invites per day. So far, the company has only designated two Great Apps: The fundraising app Causes, and music app iLike.

Last month, Facebook began deploying the wider-ranging program called Verified Apps. Interested developers can pay a small fee and apply for this designation; if they receive it, they’ll also get more prominence in news feeds and other benefits similar to Great Apps. Details are still coming out about how Verified Apps is different from Great Apps. Presumably, Verified Apps won’t get as many benefits.

Some developers have grumbled that Great Apps is a sort of welfare program for apps that aren’t otherwise getting traffic on their own merits. Facebook says these new programs are intended to incentivize good behavior; they are ways for the company to start playing good cop. Both programs are still young, so it’s hard to judge their significance yet.

It’s one thing for Facebook to tweak the rules to prevent user abuse and block spam, it’s another to attack the core feature of a leading third-party developer. Which is why many of us who cover Facebook closely were surprised to hear that the company was looking at offering its own music service.

ILike beat out a number of competitors shortly after Facebook’s platform launched to become the main third-party music provider on Facebook. Over the last year and a half, iLike has expanded from simple beginnings to offer a broad suite of music features somewhat analogous to those of Myspace Music. It began offering full-song streaming music through a deal with music company Rhapsody, for example, earlier this year. ILike chief executive Ali Partovi has cited his company’s efforts as an example of the platform’s level playing field. 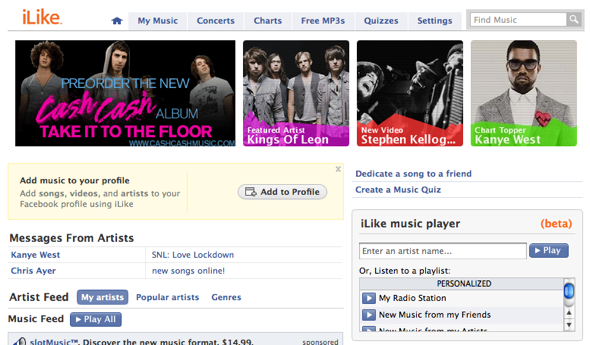 However, only weeks after Facebook designated iLike as one of the two Great Apps, Facebook’s business development team began talking with both iLike and a number of competing online music companies about its own plans for offering a streaming music service. Facebook’s idea is to offer many of the most popular features already offered by iLike, including the ability to create a playlist, see friends’ playlists, import playlists from iTunes to share with friends, share music in the newsfeed, and let other apps play music through the Facebook app. The main difference: Facebook’s implementation would have special advantages not afforded to iLike and other third-party apps.

Facebook has been considering the idea of either integrating iLike more deeply or building its own features. However, it’s still speculation to say what Facebook is or isn’t doing, Zuckerberg says:

It’s to be expected that we’ll have conversations about different things. We haven’t done anything with music. It’s not clear that we will. The reason we’re considering it is only because there’s so much complexity around music licensing and rights. It’s not even that we want to build something ourselves. We’ve talked to a lot of music providers about how to do rights work, about how we could use our leverage to help them get rights.