The iLike app is restricted by record-label licensing deals, so Facebook users can only play up to 25 songs per month before they get only 30-second clips (otherwise, users have to pay for unlimited access). Facebook would surely prefer to give its users unlimited and free streaming music, comparable to MySpace Music. But there are practical issues with Facebook’s plans for licensing music. Perhaps the largest is that music licenses typically only last a year or two; when a license runs out, the music labels will just demand more money.

But the philosophical issue is this: When the platform launched, Zuckerberg basically said that Facebook wouldn’t be focusing on specific media applications like music:

We’re not really a media company. To the extent that someone is building an application that is focused on specific media, that is unlikely to be something we would want to go after… The types of problems we solve, are all deeply technical problems.

Since then, apparently, Facebook has redefined what it considers core features, and now music could be one of them. The risks this poses to iLike, which relied on Facebook’s word, are being interpeted by some developers and Connect partners as a warning about what Facebook may do in the future.

Harvard’s student newspaper, The Crimson, penned an editorial in March, 2004 called “Manifest Destiny, Facebook Style” that ridiculed Columbia University students for protesting Facebook’s invasion — Columbia’s engineering school had its own, less developed social network at the time, called SEASCommunity.com. It was one of the earlier social networks to get steamrolled by Facebook.

Because Zuckerberg and his company have, so far, been the best at building features that users want. By this point, there’s a very long track record showing this. Facebook designed the site so people could only see profile information about their friends or people in their geographic vicinity, starting with college campuses. Users became convinced that the site was a safe place for sharing real information about themselves and living their real lives online. Over the years, it grew to high schools, companies, and eventually opened up to the world. Then it launched the platform. The entire time, it has stayed focused on helping people share information about themselves. It came out with news feeds before any major rival, it came out with status updates so friends could tell each other what they were up to — around the same time as micro-messaging rival Twitter. 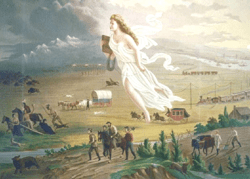 Today, the company is keeping this focus on communication, even as it continues to try to figure out how to run its platform. If Facebook fails to be the best way to share information, it could fail just like the other social networks it has bested. Zuckerberg knows this, and it’s why Facebook tried to buy Twitter:

I view it as a big part of Facebook’s role in this ecosystem [the web] to continue pushing [information sharing], to continue making it so that more people around the world can bring all of this information [from Facebook] to these different places. You know, there’s a rate at which this will happen, and if we’re not on the edge of pushing this out, then we’re not doing our job.

If applications on Facebook’s platform encroach what it considers key areas — like Photos — Facebook has shown it will tip the playing field to its own favor. This likely explains why Facebook could potentially compete against iLike by giving itself special advantages. Facebook knows that music is a great way to keep users engaged on the site, and it knows it has built a site that could make it very easy to share music.

But wasn’t the “Great Apps” program intended to do exactly that, offering the chosen applications (iLike and Causes) the opportunity for deeper integration and enhanced promotion so that they’d be surfaced to more users? And what’s to prevent Facebook from applying the same logic to invade any other business in the future?

Says another upset developer who wishes to remain anonymous: “What’s at stake is nothing short of an identity crisis for Facebook: Does it intend to be a technology platform like Windows and Google, or yet another vertically-focused media property like Yahoo or CNET?” Facebook insists it is staying a platform company.

It’s understandable that Facebook feels it must focus on innovation at the expense of some applications. But its actions result in a very real cost for the company: Negative public perception. The company hopes to develop new ways of making money through traffic generated by third-party apps. These apps generate billions of extra page views — interaction that makes the site more interesting for users — and lead to more opportunities for Facebook to make money through advertising. The company has considered ideas like developing a payments service to let apps offer ways to buy and sell goods within the site. It may one day try to monetize Connect by helping other sites target ads to Facebook users who visit them. The company isn’t saying much on these fronts, but it’s actively testing out a variety of ways to serve ads on the site that emphasize making it easier for advertisers to reach Facebook users through sharing features.

Developers know Facebook is valuable; Facebook knows its platform is valuable. And Facebook understands the issues. The numbers show why developers are still building apps — as Zuckerberg says, they get social context:

They can get sharing, through users’ experiences on Facebook. Developers can choose to invest more to take advantage of this. But we’re not necessarily asking large companies to invest millions of dollars the first time they decide to experiment with the platform. The platform is still young. We’re open about that. There’s a reason that more than 10,000 apps have been built. Value is being given. We’re going to be investing in it more and more.

The problem is that trust, once lost, is hard to regain. Smaller developers will no doubt continue to pay what some call a “tax” of making constant changes to their applications. But will larger developers stay? And will other web sites fully integrate Connect — not all of them are yet, although the service has only been rolled out for a little over a week. As yet another anonymous developer put it, “they can’t have their platform and eat it, too.” Google has launched its competitor to Connect, called Friend Connect. MySpace is working on its own.

That’s Facebook’s gamble. If it continues to be the most popular social network in the world, and if its constant changes result in a better experience for its users, developers will continue to build for it. This end will justify the company’s means.