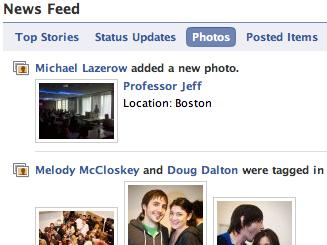 Does Facebook’s new redesign focus too much on publishing information about yourself and what you’re interested in, and not on simple means of self-expression, like decorating your user profile with virtual glitter? I wondered about that when the redesign launched ten days ago — I personally liked the changes, but I wasn’t sure if the average Facebook user would. Today, another twist adds to the impression that the redesign is going to end up a hit, and I’m starting to think I’ll be eating my words pretty soon here. You can now sort news feeds using tabs for “Top Stories,” status updates, photos and posted items from other web sites.

In essence, these tabs let a Facebook user quickly look through the deluge of information about friends that flows through the news feed feature. And at least in my estimation, they help the redesign matter more to the average user. If that proves to be the case, Facebook will be accomplishing something special that it has long intended — forcing users to learn more about each other and the world, thereby making us collectively smarter.

Granted, some users may still want to add glittery applications to their profiles in ways that the redesign doesn’t account for. But, the fact that feeds can feature Facebook photos is in and of itself probably a big deal — Facebook has long claimed to be the largest photo-sharing site in the world, and comScore says it draws in more than twice as much traffic as the next three photo-sharing sites combined. Because Facebook friends tend to be real people providing real information, sharing photos on Facebook is a classy form of exhibitionism, and checking out others photos is a classy form of voyeurism. The photos tab enables more efficient exhibitionism/voyeurism. 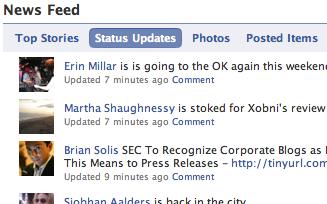 Okay, maybe the photos tab isn’t the most educational one. But let’s remember that Facebook users got addicted to the news feed feature shortly after wildly protesting when it launched in the fall of 2006, so breaking out tabs beyond photos is certainly a useful thing to do. In the latest changes, the “Top Stories” tab is just the normal news feed, so if you don’t want to sort, you don’t have to. However, the latest iteration of the redesign now lets you choose which friends’ feeds you prefer to see more often, as the old design did; Facebook also has its own calculations for what feed “stories” from friends it decides to emphasize.

Meanwhile, Facebook’s status updates are just getting more and more love — a good portion of my friends, especially those who aren’t in the tech world and addicted to Twitter, use this feature. The redesign already makes it painfully obvious that a user can leave a status update by including a big status-entry text box at the top of each user’s profile page; the company’s new iPhone application is also built around easily sharing status updates. The new “status updates” tab just makes status updates from friends even more obvious.

Finally, back to my point about Facebook educating the world: The tab for the “posted items” button. As I wrote in my earlier redesign critique, Facebook employees have been saying that this feature was surprisingly not popular with most users. But maybe this new tab will make that option more obviously interesting by costing users only one click.

There’s another engaging addition to the news feed, too. You can also comment on news feeds like you already can on profile mini-feeds, without having to go to separate pages for photos, posted items or what-have-you.

But there’s another missing piece, at least in developers’ eyes. There’s no way to add a tab for applications — and some applications, as Justin Smith points out, are quite popular and have “stories” that users might want to be able to quickly sort and see within their news feeds.