Facebook is releasing a host of updates for its enterprise team solution so users can adapt it into their workflow. The company announced today that it’s now supporting file-sharing, eDiscovery, and compliance; expanding its live video capabilities to include professional cameras; and perhaps most significantly, opening up the doors to third-party bot makers.

Since officially launching in 2016, Workplace has targeted the business world, similar to Slack, Cisco Spark, Yammer, and other team collaboration services. Highlighting interest among companies, Facebook revealed that more than 14,000 organizations are using Workplace — it declined to state how many individual users there were, though. Some of these companies include Discovery Communications, the Financial Times, Viacom, Starbucks, World Wildlife Foundation (WWF), Oxfam, and the government of Singapore.

“What we’re seeing, as we bring this software that 1 billion people know how to use, into the workplace, it transforms [employees’] productivity and how they’re connected to colleagues,” explained Simon Cross, Workplace’s product manager. “It fundamentally changes the speed in which you can make decisions and the context you feel connected to a company’s mission.” 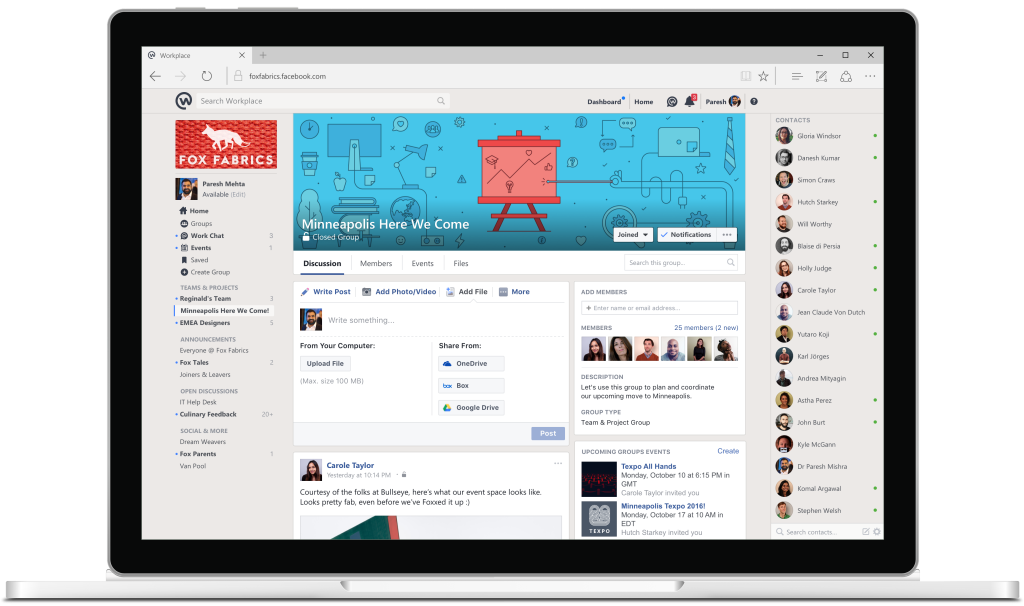 Above: File uploading within Facebook’s Workplace.

Facebook has added support for file and document sharing, partnering with Microsoft, Salesforce, Quip, Box, and Dropbox to bring files from the cloud directly into Workplace. While the service did have file sharing previously, it was a simple tool; “now we’re partnering with experts in the space,” Cross said. “We’re making it much easier to share, preview, and discuss records.”

Employees can open up the native file picker, select a file, upload it, and have it transformed into a rich story that includes a preview for every image or page. Viewers can swipe through it on the web or mobile and comment or like every single page. Cross claimed there’s now one place to go within Groups to see all the files that have been shared by each member, organized by the provider. “It’s simple, but incredibly powerful,” he proclaimed.

Facebook is also adding more security tools for administrators to protect conversations within Workplace. The company has previously added enterprise-level features such as two-factor authentication and ways to manage user access. It’s now focusing on eDiscovery and data loss prevention, partnering with CS Disco, Netskope, Smarsh, and Skyhigh to give organizations a choice in how much security they want in their instance. Bring on the bots

Developers interested in bringing bots to the enterprise won’t have to wait any longer, as Facebook has opened the doors for a select group of providers to integrate their bots into Workplace. While the service already has some first-party bots available for organizations, sometimes special ones are needed to accommodate their workflows.

“In the past, bots have managed Outlook and Exchange servers, but the IT department is capable of fulfilling its mission by making the company efficient with tech,” Cross said. 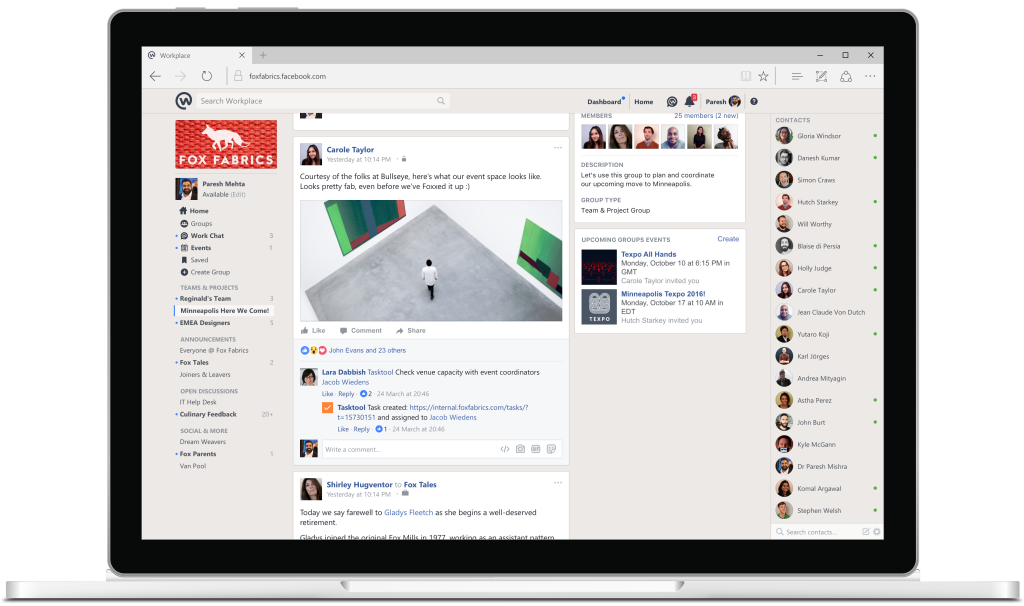 He shared that the APIs developers would use are based on the Facebook Messenger platform, and the social media company has teamed up with Converse, PullString, The Bot Platform, Kore.ai, and Avaamo to produce bots for the workplace without writing a single line of code. Cross confirmed that this was the first time bots have been made available on Workplace.

“We have had custom integrations since November, but [limited to] automating the management of Workplace like changing job titles or making sure [employees] are in the right groups,” he remarked. Cross hopes that the introduction of bots will dramatically increase the experiences people can build within Facebook’s enterprise platform. 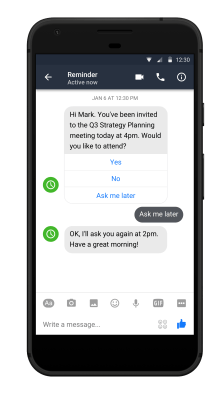 Above: A bot within Workplace.

These bots will be available within groups as well as Workplace chat. Users can @mention a bot to initiate a task or workflow, similar to Slack. As you might expect, when tasked with something, the bot will take action and reply back with relevant information. Bots can also be used to deliver important notifications.

It shouldn’t be surprising that bots are now available — a spokesperson told VentureBeat last year that there’s a massive opportunity for bots when the Workplace platform opens up. The introduction of bots puts it on par with Slack and other team tools that are pushing hard on automation programs to make it easier for employees to get things done without jumping from app to app. But unlike others in the space, Workplace appears to be limiting bots to whatever organizations can create themselves, not other service providers.

When asked about whether additional opportunities for developers will be available, a Facebook spokesperson declined to answer, saying that “developers at companies are able to build custom bots to suit the needs of their individual workplace.”

“The way people work is dramatically changing. People come into the workplace with modern expectations about how to work, expect a voice, access to leadership, a challenge, and ask questions about how the company is doing. As we get to a point where every employee in every company has access to Workplace on phones and desk, it will dramatically change the pace at which organizations can make quality decisions. Not everyone has been connected before. In the next couple of years, the value of connecting people will be dramatic,” Cross said.

Facebook has also shared what’s next for Workplace, albeit in vague terms. The company said that it’ll continue to work on expanding Workplace to accommodate teams of every size, add more integrations to simplify workflows, and find ways to not only connect coworkers together, but connect companies with suppliers, vendors, and agencies.