Facebook has hit a milestone today as its stock price has topped $100 per share in current market trading hours. The company now has a market cap of over $280 billion.

Since July 16, Facebook’s stock price had hovered within the $90 range, creeping ever closer to $100. Analysts had predicted that the company would hit this record sometime between 2014 and 2016. The stock came close on Monday prior to its Q2 2015 earnings hitting an all-time high of $99.24 and even closed at $98.39 recently, but still hadn’t found a way to break through.

The social networking company announced its second quarter earnings in July, and some thought that this milestone would be hit then. However, since then, Facebook’s stock has dropped to the $93 to $94 range. But over the past few days, the stock has rebounded to now go as high as $102 in active trading today. One potential reason for the jump is Facebook’s recent announcement that the company has unveiled universal search across all public posts, likely taking on Google and Twitter.

But does the fact that Facebook’s stock is now worth $100 a share mean anything? In reality: no. It’s a historic moment for the social networking company, and some might say that it’s a sign of a less volatile Facebook. Amid all of this, it’s worth noting that the company’s market cap is certainly telling.

Three years in the making

It took Facebook slightly longer than three years to achieve this record, and it wasn’t an easy journey for the company. We looked at the amount of time other companies took to get there:

These are just for comparison purposes to see how other tech companies reached this milestone.

In the first year of its IPO, Facebook’s stock price fluctuated, but stayed within the $20 to $40 range. That changed on July 24, 2013 when Facebook announced its second quarter earnings (“Soon, we’ll have more revenue on mobile than on desktop,” CEO Mark Zuckerberg said at the time), and then the stock took off upwards on the journey to $100 a share.

Facebook’s stock been inching upwards over the past few days, thanks to analysts from firms like Merrill Lynch expressing positive comments about the company, mostly spurred by its rapidly growing user base and platform traction. 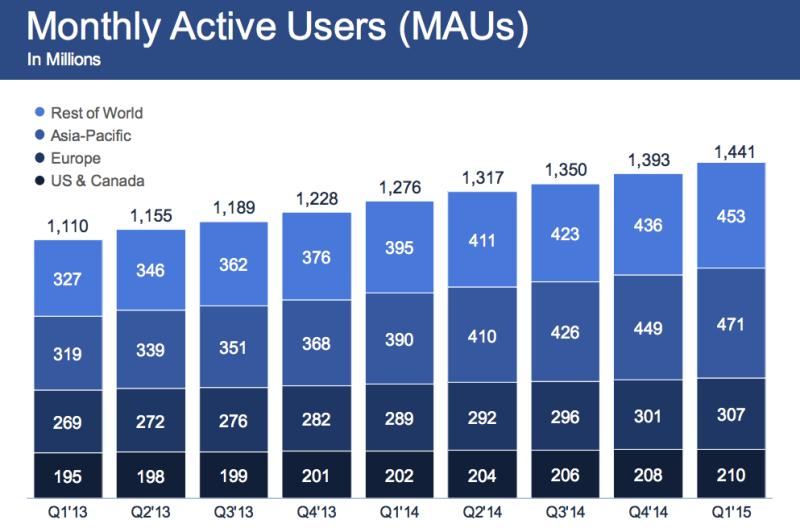 Above: Facebook’s monthly active users, as of Q1 FY2015

The social networking company has certainly seen huge growth in its user growth. It now has more than 1.44 billion monthly active users (MAUs) worldwide, of which at least 581 million MAUs access Facebook on mobile only. It has also successfully converted itself into not only a mobile-first entity, but “mobile-best.” Besides its core app gaining a lot of usage, it’s found a working formula to develop some of the biggest mobile apps in the marketplace today:

But it’s not just product traction that has propelled Facebook’s stock upwards. Advertisers and developers may be intrigued by the social network’s reach and targeting capabilities, thanks to the debut of its mobile app install ads, desktop video app ads, acquisition and expansion of the LiveRail ad platform, and the launch of the company’s Audience Network, to name a few.

On May 18, 2012, the world’s largest social networking company made its public debut. It was considered at the time to be the biggest technology IPO — and also the biggest in Internet history, thanks to its market capitalization of over $104 billion. As highly anticipated as it was, it wasn’t exactly the best day for Facebook: Trading was plagued by technical problems at Nasdaq due to huge order volume.

Facebook’s stock price was originally priced at $38 per share, but actually traded at $42 before closing at $38.37. However, for the first year as a public company, shareholders didn’t seem overly impressed by its performance. And it’s not that Facebook didn’t try — it just made a few mistakes along the way.

Of course it had to deal with the fallout from its IPO, such as criticism that Zuckerberg was being “immature” with investors during Facebook’s pre-IPO roadshow, and also litigation brought by shareholders who alleged that the company deceived them about its growth prospect prior to its IPO (the case was dismissed in 2013 and the dismissal was reaffirmed by a U.S. federal appeals court).

Early on, Zuckerberg had to do a mea culpa to apologize for betting too much on HTML5 as Facebook’s mobile strategy, instead of native applications. Moving past that, the company accelerated its mobile strategy to make sure that the social network was available to everybody everywhere, but even that hit some stumbling blocks — remember Home?

Amid all of this, Facebook has dusted itself off and moved forward. The results have impressed stockholders, with the overall trend of its stock price moving upward. Out of the 12 quarters the company has provided earnings reports on, it beat Wall Street estimates 10 times, only falling short last quarter (it met expectations in Q2 2012, the first quarter of trading).

Since its public debut, Facebook has also launched and acquired products to help it remain relevant as a connector of people in the digital age. Among such activities include the purchase of Oculus VR in 2014 for $2 billion, the launch of Internet.org, broadening of its developer network with the acquisition of Parse, the unveiling of its version of an enterprise social network, and more.

Facebook’s stock opened up at $101.91 today, after closing at $99.67 yesterday. So far, it’s being pushed up 0.96 percent, with the market still open for another few hours. We’ll update where this stands after trading closes for the weekend.

The company is scheduled to announce earnings results from its third quarter on November 4.