Facebook began letting developers access another part of its site last week, the so-called “stream” of information that shows each user what their friends are up to. Termed the “open stream API,” this application programming interface lets developers display the activity of a user’s Facebook friends to that person on other sites, or on other applications. Facebook envisions the stream being a central way to read information around the web — and the company has a grand vision for it that includes aggregating information from around the web, and making the stream update in real-time, something it has started doing today.

But not all applications are welcome. One application developer that I’d been talking to, Teck Chia, has had his app closed by Facebook. Called FB RSS, it let you subscribe to your Facebook stream about your friends activities using an open RSS feed, meaning you could access data about your friends on Google Reader, or another RSS reader, or on any other site, like on a public Twitter account. ReadWriteWeb wrote up a few interesting uses for it last week and today covers the subsequent shutdown (I’d warned Teck about this when he’d pinged me last week).

The fact that FB RSS was canceled shows how developers trying to use the stream are restricted — and these restrictions could make freely distributable alternatives for social content, like Twitter, more attractive. 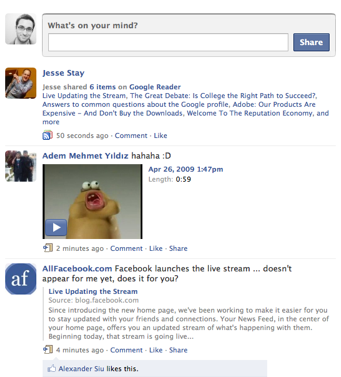 The way the “open stream” works, from a user’s perspective, is that a developer first asks a Facebook user for access to the stream, then display that information to that user on another site. But at this point developers cannot aggregate all of that information beyond Facebook. What if everyone published their friends’ activities to Twitter? “Imagine if just a few hundred thousand people decided to do that,” Facebook engineer Ari Steinberg wrote in an unofficial comment on the Activity Stream group, a developer group focused on making streams more accessible across the web. “Suddenly you’d have tens of millions of people’s private content publicly searchable on Google without their permission.”

Facebook, Steinberg says, wants to see some sort of privacy standard that can allow people decide what information to let their friends re-share. “We’re certainly not opposed to enabling you to export your own content (in fact, we’re always trying to work on ways to make that easier),” Steinberg explained “but exporting all your friends’ content to a totally public place without their permission isn’t cool.”

It’s a fair point, but that solution also sounds like it would be complicated if even usable. Thing is, most people who use Twitter are already making information publicly sharable. Anyone else can subscribe to it and re-syndicate it. Third parties can easily access this information and aggregate however they want. The result is interesting community sites like hashtags.org, that should all public tweets about any topic with an # in front of it.

Meanwhile, Facebook is turning on a promised part of its stream, real-time updates. When new updates come in, a small icon beneath the “publisher” messaging box at the top of the site will notify you, and include the number of updates. As Inside Facebook’s Justin Smith notes, expect to see real-time notifications become a feature for developers looking to access the stream. Real-time updates could make the stream more useful in other applications that are trying to use it, but given the restrictions, I’m still looking for compelling use cases. So far, the main ones seem to be reading and responding to your friends feeds in desktop applications, such as Xobni, which brings social data into your email.