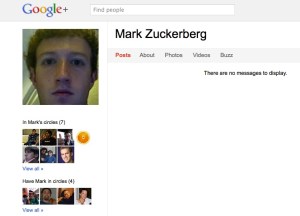 In a game of social networking chicken with Google, Facebook CEO Mark Zuckerberg is not blinking. Zuckerberg currently has the most followers on Google’s new social network, Google+, beating out Google CEO Larry Page and Senior VP Vic Gundotra, according to socialstatistics.com.

Google+ could be a new feather in Google’s cap by giving it a legitimate social media platform to compete with the likes of Facebook and Twitter. So it’s humorous to see Zuckerberg have such a substantial presence on Google+, more even than Google’s own executives. On the other hand, Zuckerberg is enviably well-known for a CEO, and Hollywood hasn’t (yet) made a movie about Larry Page and Google’s early days.

Even though Zuckerberg has not publicly posted any messages to those who follow him, it will certainly be fascinating if he does decide to start sharing on the service.

Socialstatistics.com appears to be slightly behind real time count, listing Zuckerberg with 29,543 followers when he currently has 34,759 followers. Zuckerberg also has 68 declared people he follows, with the majority of users being Facebook employees.

The most logical conclusion would be that Zuck and his employees are testing the service to get to know the competition. For instance, Zuckerberg created a Twitter account in Feb. 2009 but stopped posting updates March 2009. It’s certainly possible Zuckerberg is doing the same thing here to get a feel for a new, hot competitor.

In a related story, Facebook just blocked a Google Chrome extension that allowed users to export their Facebook friends to other social networks, such as Google+. It’s possible Facebook is concerned about Google+, but it’s hard to tell just what Facebook’s approach will be with its employees using the service.

What do you think Zuckerberg is up to?