Moments after a police shooting in the Falcon Heights suburbs of Minnesota, a Facebook Live video was published depicting the aftermath. In the video, a police officer is seen pointing his gun at a man reported to be Philando Castile — shot and bleeding through his shirt — while a woman, recording from the driver’s seat of a car, recounts the events directly to the camera.

The video, which provoked immediate, widespread outrage across Facebook and Twitter, temporarily disappeared from Facebook hours after it was published. Later, it returned with a warning label asking, “Are you sure you want to see this?” 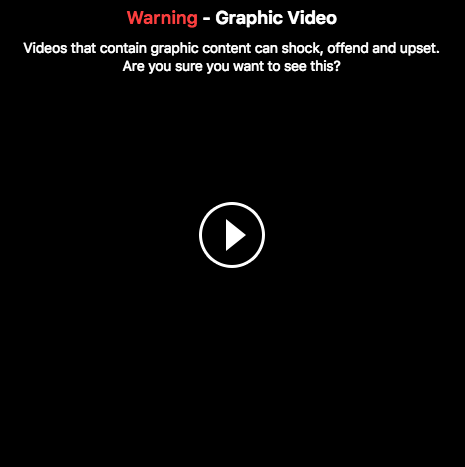 Above: A screenshot of the livestreamed video.

Facebook introduced its livestreaming service, the one used to broadcast tonight’s events, with an idyllic vision last year; the company described parents sharing “moments in their kids’ lives,” sports figures “giving people a window into their training,” and chefs “bringing their fans into their kitchen.”

Recent events, however — the livestreamed Chicago shooting included — affirm the service’s increasingly dire function as a megaphone in our dystopian present, where U.S. citizens of color, disproportionately killed by police and mass shootings, can turn to Facebook to reach some fraction of the company’s 1.6 billion users. The fraction who see Live videos before they disappear. The fraction who decide, yes, they are sure they want to see this.

Before the video was pulled, the events were broadcast to 1.5 million people. After reaching out to Facebook for comment on why the video disappeared, we received the following response from a company spokesperson who blamed the video’s absence on “a technical glitch.”

We’re very sorry that the video was temporarily inaccessible. It was down due to a technical glitch and restored as soon as we were able to investigate.

To date, CEO Mark Zuckerberg has crafted Facebook in a Jobsian way, as a fortress scrubbed of imagery which dares to offend. But the company has a moral obligation to not only tolerate, but to support, users who deviate from its safe, family-friendly core in acts of protest. It is simply too big, and too important, not to.

Tonight, however, the company appears to have struggled to simply get out of the way. Perhaps users flagged the content as “inappropriate” a certain number of times, and that’s why it disappeared. Maybe some other “glitch” occurred. Whatever happened, Facebook can do better.

Update July 8, 10:01 a.m. PT: A new report from the Register today claimed that Saint Anthony, Minnesota police may have deleted the video from Facebook themselves, challenging Facebook’s claims of a “glitch.” Later, a Facebook employee who asked to not be named countered this report in a call with VentureBeat, claiming “that’s not what happened, the problem was on our end.”

“We did what we could to put the video up as quickly as possible,” they said.

While this comment alleges that Facebook itself was the cause of the deletion, it does not address whether or not police accessed the smartphone and Facebook account belonging to Philando Castile’s girlfriend, Diamond Reynolds.

We’ve reached out to the Saint Anthony, Minnesota police department for comment.

The update above was revised at 1:25 p.m. PT for clarity and to address a typo.