After 10 years, the Fantage virtual world for kids will shut down on June 30, according to a message from the company.

The virtual world had a good run, but it joins other virtual worlds for youngsters like Club Penguin that have shuttered or are in the process of shutting like Runescape Classic.

The website will run as usual until the closing date. If there is time left on a player’s premium membership or if players have virtual currency, they can use it during the remaining time. But after it closes, their belongings in the world will be gone.

If players purchased a subscription through a third party, such as HiPay, they must contact them directly to cancel the subscription. All premium memberships and virtual currency purchases are non-refundable. The site’s payment page has been closed, and Fantage will no longer be accepting payments. 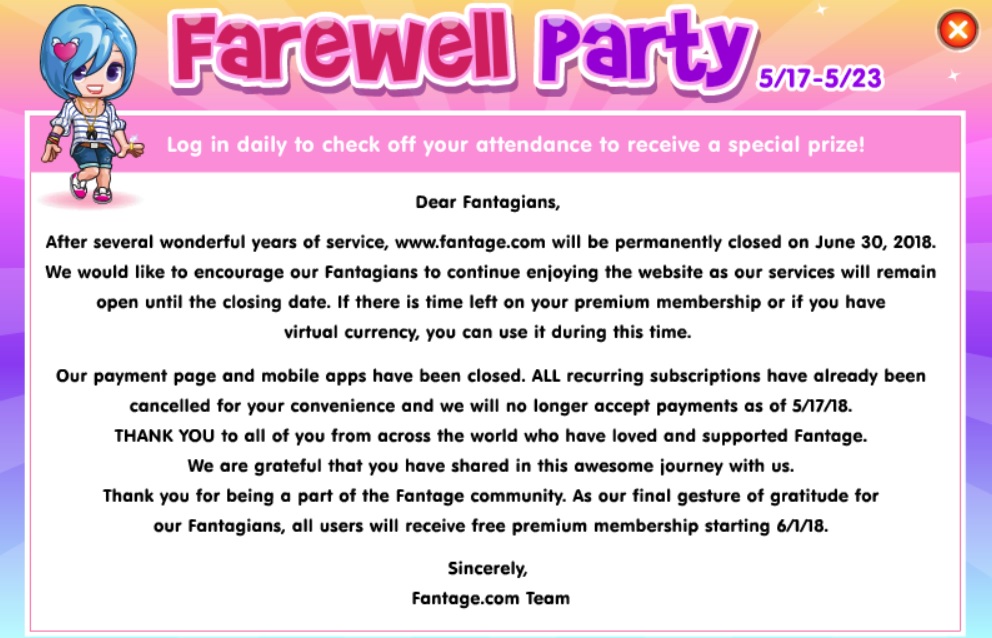 Above: A final message of shutdown for Fantage users.

“While Fantage was not as popular as Club Penguin, it was loved enough that its large user base was in sadness over the news. That’s not to say that it was unexpected though,” said Faria Jewel, a former Fantage fan, in an email.

She said it had changed a lot over the years.

“There has already been a petition to try to save the site, and fans have been trying to send enough mail to the company that the company started giving out automatic e-mails,” she said. “There is also a private server of the game being made, similar to how fans managed to recreate Club Penguin and Toontown Online with private servers after they were shut down.”

Fantage was born in March 2008 in the middle of a boom for kid-focused virtual worlds. Disney bought Club Penguin for $700 million in 2007, and soon enough, there were 200 kid-centric virtual worlds in development.

Cofounders Peter Bae and David Hwang studied Korean online games, and they experimented with what to do in the U.S. They started their company in January 2007 in Palisades Park, N.J. This was Hwang’s third startup and Bae’s second. They hired some contract programmers and decided to build a site focused on online education. First, they tried an online math website. It went nowhere.

Next, they decided to build a virtual world with built-in games for young kids. After a few months, they showed it to a focus group of kids who hated it. Bae and Hwang tossed it all out. Then, they created what would become Fantage (short for Fantastic Age), a fantasy world modeled after Disney’s Club Penguin.

Fantage was a place where kids could create cartoon-like avatars and dress them up, chat with friends, and play simple games. The art was based on cute Japanese anime style but with distinctly American twists. The characters had big heads, big eyes, and small bodies. They could make gestures and glide around on an air board. I was actually surprised to see what might be considered a copycat world take off.

The company staged a farewell party last week for the fans. I asked Bae for a comment but haven’t heard back yet.

“Unfortunately, it doesn’t look like there will be any successor to this game (like how Club Penguin Island succeeded Club Penguin), so once Fantage closes, it will be the last we hear of them,” Jewel said.