Representing a potential medical quantum leap similar to, but even more important than the commercialization of X-ray imaging, Pacific BioSciences has taken a whopping $100 million to make it possible to affordably map out an individual’s entire genome in a matter of minutes, and for under $1,000 dollars.

While several startups, including 23andMe and deCODEme, are already offering cheap genetic testing for individuals, the technology Pacific Bio is looking at is about as different from those as looking at a satellite image of a town is to walking through it. The company is working on a system to “read” each DNA letter in a person’s genetic makeup, providing an in-depth view of every factor affecting a given person’s health. 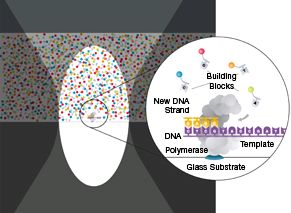 The idea sounds fairly simple: Individial DNA molecules are captured in tiny holes on a chip, where they are pulled apart and rebuilt with enzymes identical to those present in the body, but with the addition of chemical markers. A type of digital camera takes a picture of the process, identifying the specific fragment being looked at. We covered the technology in more depth when it was first revealed, and have mentioned various competitors, most notably Complete Genomics and BioNanomatrix, who want to do sequencing for under $100.

In practice, of course, operating at such tiny scales is difficult, and accurately sequencing thousands of genes at once seems nearly impossible. But the company says it will be ready to commercialize by 2010, a Herculean feat if it can pull it off. The new funding indicates that it is at least gaining the confidence of venture capitalists.

If and when that happens, it will be time for early investors including Alloy Ventures, Kleiner Perkins Caufield & Byers, and Mohr Davidow Ventures — who collectively plowed more than $70 million into Pacific Bio over four previous rounds — to rake in the money.

However, it will just be the beginning for a whole new field of medical technology centered around finding uses for all the new information in individuals that becomes available. Preventative medicine is the obvious use, but others, like data mining for new cures and information on diseases, are also possible. Laws regulating the use (and misuse) of such information by insurers, employers and others will also have to be formulated.