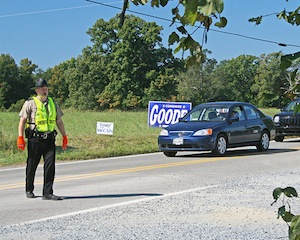 Julius Genachowski, the Federal Communications Commission chairman appointed by President Barack Obama, just came out strongly in favor of net neutrality (the principle that providers must treat all Internet traffic equally, regardless of the content or users involved). During his speech this morning at the Brookings Institution, Genachowski said he wants to formalize the FCC’s position on the issue into six rules.

“I believe the FCC must be a smart cop on the beat, preserving a free and open Internet,” he said.

Previously, the FCC outlined four “principles” to guide its decisions on a case-by-case basis. Here’s how Genachowski summarized those principles (I’ve added numbering for clarity): “Network operators cannot prevent users from accessing the lawful Internet (1) content, (2) applications, and (3) services of their choice, (4) nor can they prohibit users from attaching non-harmful devices to the network.”

However, this approach has led Comcast to challenge the FCC’s order that the Internet provider stop slowing downloads for peer-to-peer file-sharers. Comcast argues that there must be a federal law of regulatory policy in place before the FCC can enforce those principles.

Genachowski never explicitly referred to Comcast in his speech, but turning the four principles into formal FCC rules should give the commission more legal power to enforce them. He wants to add two new rules as well:

6) Providers of broadband Internet access must be transparent about their network management practices.

In keeping with the Obama administration’s love for throwing up websites whenever it launches a new initiative (not that I’m complaining), the FCC has launched openinternet.gov to promote and seek feedback on its net neutrality policies.

And because I liked his speech, I’ll let Genachowski have the last word:

In closing, we are here because 40 years ago, a bunch of researchers in a lab changed the way computers interact and, as a result, changed the world. We are here because those Internet pioneers had unique insights about the power of open networks to transform lives for the better, and they did something about it. Our work now is to preserve the brilliance of what they contributed to our country and the world. It’s to make sure that, in the 21st century, the garage, the basement, and the dorm room remain places where innovators can not only dream but bring their dreams to life. And no one should be neutral about that.

Update: Here’s what Comcast has to say about Genachowski’s speech:

We welcome the dialogue suggested by the Chairman in his comments, and we completely agree that any consideration of new “rules of the road” begin with notice and an open, public rulemaking proceeding – this is both fair and appropriate.

But before we rush into a new regulatory environment for the Internet, let’s remember there can be no doubt that the Internet has enjoyed immense growth even as these debates have gone on.

The Internet in America has been a phenomenal success that has spawned technological and business innovation unmatched anywhere in the world. So it’s still fair to ask whether increased regulation of the Internet is a solution in search of a problem.

Allowing a handful of broadband carriers to determine what people see and do online would fundamentally undermine the features that have made the Internet such a success, and could permanently compromise the Internet as a platform for the free exchange of information, commerce, and ideas. By outlining explicit open Internet requirements, the FCC is seeking to prevent this from happening.

There’s no doubt that running an Internet service provider is a complicated business. As we’ve said in the past, we believe that providers should have the flexibility to manage traffic congestion and malware on their networks in non-discriminatory ways. They should not, however, be in the anti-competitive business of picking winners and losers. For example, carriers should not be allowed to degrade access to competitors’ web sites, to favor access to a corporate partner or their own value-added services to the detriment of a Mom and Pop shop, or to discriminate against protected political speech