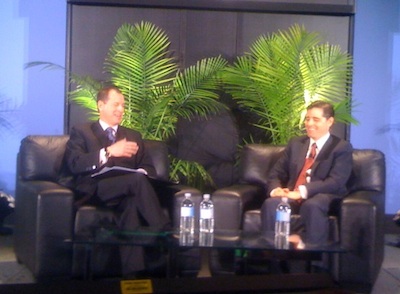 Julius Genachowski, the Federal Communications Commission chairman appointed by President Barack Obama, talked at the Consumer Electronics Show in Las Vegas today about the agency’s ambitious national broadband plan. He also answered several pointed questions about government regulation. His responses were big on vision and nuance, but when asked to describe his goals for the country in a single sentence, Genachowski punted.

In other words, one of the goals in preparing the plan is to figure out the goals of the plan.

Broadly, Genachowski did note that the FCC has been ordred to look into ways to promote universal access to broadband. That means making sure broadband infrastructure reaches everywhere in the country. But the government also needs to address the 30 percent of the populace that has access to broadband infrastructure but chooses not to use it, either due to unaffordable costs or other issues.

This effort is important to the economy — not just according to Genachowski, but also to Gary Shapiro, chief executive and president of the Consumer Electronics Association. Many of the demonstrators at CES are counting on growing broadband adoption to fuel demand for their products, so in a sense, they’re counting on Genachowski to succeed, Shapiro noted.

The plan recently hit a speed bump, with the FCC delaying its release from February until March. Still, Genachowski said it will be out “very soon.”

And what if the FCC can actually achieve the goal of universal broadband — what effect will that have on the agency and its rules? Or as Shapiro put it, “If we achieve this vision of broadband, do we need all this regulation?”

The government has traditionally justified regulating  media like radio and television with the argument that there’s limited spectrum available, Shapiro said. So if everyone is watching their TV and getting their news over the internet, does the need for regulation disappear?

“Universal, ubiquitous, high-speed broadband access — that changes a lot of things,” Genachowski said, and presumably the regulatory situation would have to adapt to these changes. However, he declined again to get too specific, adding, “I’m acknowledging the validity of the question.”

Genachowski also discussed the future of wireless, particularly how to deal with the fact that there’s not enough wireless spectrum to meet the demand.

“Our data shows that there’s a looming crisis,” he said. “Not tomorrow, not next week, not next year, but at some point in the future, the system is going to be overloaded.”

To avert the crisis, more spectrum needs to be found, but the existing spectrum also needs to be used more efficiently, Genachowski said. Hopefully, the private sector can come up with some solutions. If not, the FCC will get involved.

Near the end of the interview, Shapiro looked beyond specific issues and asked Genachowski how we should judge his success. Once again, the FCC chariman said there are some goals that he can’t talk about yet (presumably they’re part of the national broadband plan), but he did say, “One of my my goals at the FCC is to help turn it into a 21st century agency.” To that end, the FCC launched a site yesterday to invite citizen participation in the process of revamping the Commission.