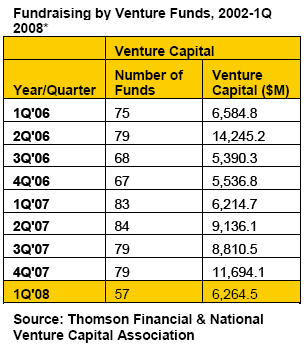 Fewer venture capital firms raised new money during the first quarter than any period over the past two years.

However, the National Venture Capital Association, which published the data, said it does not believe the decline is related to the economic downturn. Rather, many firms raised money within the last several years, and they are now in the process of investing the money, it said.

Also, while only 57 raised new funds during the first quarter, they raised about the same amount in total as the 83 firms that raised money during the same period last year.