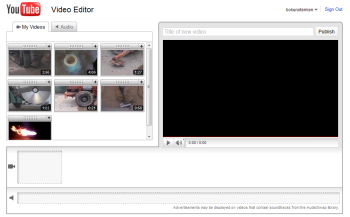 If you’re a YouTube user who never got around to learning how to edit video, the company has you covered. Today, YouTube unveiled its web-based video editor, which offers several simple ways to make your videos better.

The editor lets you trim the beginning and ending of videos, combine several small videos together, and add audio from YouTube’s AudioSwap library. The interface (as demonstrated in the video below) appears to be fairly straight forward — it looks simple enough for someone who has never edited video before to feel comfortable. It’s clearly not aiming to take on professional applications like Final Cut Pro or Adobe Premiere, and it’s even a long way from entry-level solutions like iMovie and Windows Movie Maker.

The editor is actually the second of its kind for YouTube. In 2007 it launched the Adobe Premiere Express-powered YouTube Remixer, which offered the same basic features. The Remixer died a quiet death less than a year after it was put online. YouTube’s new editor is entirely JavaScript-based, which should make it less of a resource hog than the Remixer.

You can try out YouTube’s new video editor for yourself at the TestTube section of the site, which is home to YouTube’s experimental features.