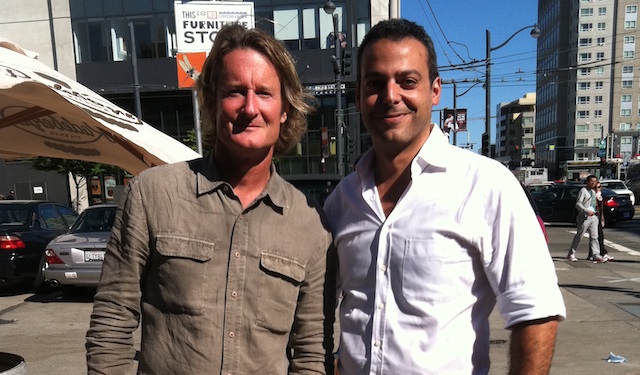 DoubleClick cofounder Kevin O’Connor has a new startup, FindTheBest, aimed at helping you compare everything from air purifiers to venture capitalists.

Now, with a $6 million funding round from Kleiner Perkins that closed Tuesday, FindTheBest should be in a good position to build out its “data driven content platform,” which combines computer-driven semantic analysis with human-powered tagging to build data sets quickly and efficiently.

“‘Human’ is dirty — it’s not scalable,” O’Conner (above, left) said in an interview at VentureBeat’s headquarters, citing a long-held Silicon Valley bias against companies whose competitive advantage is based on their employees rather than their technology. “But people are shocked by how quickly and cheaply we can build these data sets.”

FindTheBest, which VentureBeat has covered before, collects data on dozens if not hundreds of product and service categories, organizing data about each product or provider into structured tables that make comparisons easy. The interface lets you sort by clicking on column headings, filter by location and other criteria, and in general examine alternatives side by side. The available columns and filters are different for each product category. 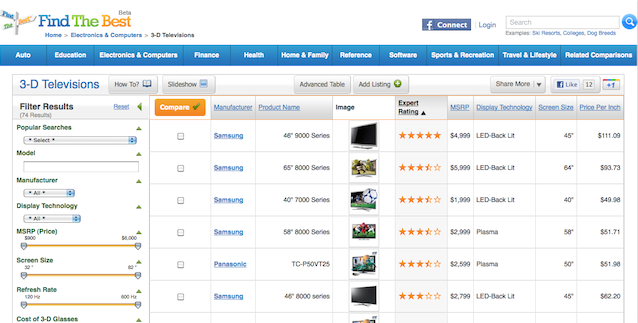 For instance, if you’re looking for a mountain bike, you might look at the site’s mountain bike comparison page, which lets you filter by wheel size, suspension type, frame material, price, and other criteria.

If you’re looking for summer camps for your kids, you can filter by location, cost per week, the minimum age of campers they’ll accept, or the number of campers per counselor, among other aspects.

“We’re also driving countless phone calls,” says Rabin. Occasionally, when the number listed for a company has been the CEO’s direct line, that has led companies to call FTB to ask them to change the number.

That brings up a difficulty facing any company hoping to build a huge database of consumer information: how to keep that information current? FTB hopes to use crowdsourcing to solve that conundrum, by letting companies update their own product and service data on the site.

But it’s not just a consumer play. FindTheBest also wants to license its technology to other websites, allowing them to include product-comparison categories within their own sites.

The most popular categories currently include dog breeds and bicycles. The company plans to expand into a wide variety of other niches, including plastic surgery, babysitters, schools and even breast pumps.

“Any purchase where you’re going to make a considered decision” is a target for FindTheBest, says O’Connor.

FindTheBest has raised $6.76 million to date, including the current round from Kleiner and an initial seed investment of $750,000 from the founders. The company is based in Santa Barbara, Calif., and is opening a New York office headed by Yaghoubi.