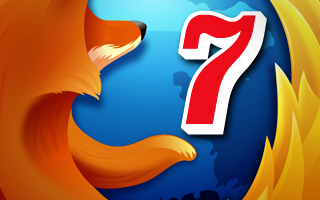 Mozilla released Firefox 7 today, and the new version of makes web browsing faster than ever.

The update is especially helpful for the hardcore web junkies among us who browse with scores of open tabs and browsing sessions that span multiple days.

The hackers at Mozilla are still working on accurate benchmark tests for quantifying Firefox’s memory usage and improvements.

Mozilla says Firefox 7’s improvements should be most noticable to users who leave browser windows open for many hours or days on end, who browse with multiple tabs at once, who open image-heavy pages or pages with large amounts of text, who run Firefox on Windows machines or who use the browser simultaneously with other programs that take a large toll on memory.

Firefox 6 was released just last month. The six-week cycle is part of Mozilla’s plan to iterate rapidly and bring users a better browser experience as quickly as possible.

This release also brings some new features for developers. Firefox now supports the ellipsis mode for the text-overflow property. Also, the HTML5 Canvas element in Firefox 7 is even faster. Finally, the browser now supports the Navigation Timing spec, which lets you monitor parts of a page’s performance within the page itself.

Mobile web developers in particular will see some specific improvements in Firefox 7. WebSockets is now enabled by default for Firefox for Mobile, allowing for faster communication between Firefox and web servers. Mozilla said this should be most helpful to developers building low-latency mobile apps and interactive mobile games.

In general, the Firefox for Android team has taken steps toward a more seamless PC-to-mobile browsing experience. Interested parties can read more about those steps on the company blog.