Several hours into Firewatch, a character told me over my radio that she is “as real as the sky is blue.” I looked up. The sky was orange and obscured by smoke.

It was at this point that I didn’t trust anyone or anything.

Firewatch, the first release from new studio Campo Santo (composed of several industry veterans), is a first-person adventure game that releases on PlayStation 4 and PC on February 9. Beyond that, I’m afraid to give you any specifics. I went in with almost no idea of what to expect, and I think the experience benefited from that. I will confirm that I love Firewatch. It’s bold and different. And it is structured and written with such a deep understanding of the way games work that it left me astonished.

Play this game. And check out our other reviews — for games like Unravel and The Witness — in our vault. 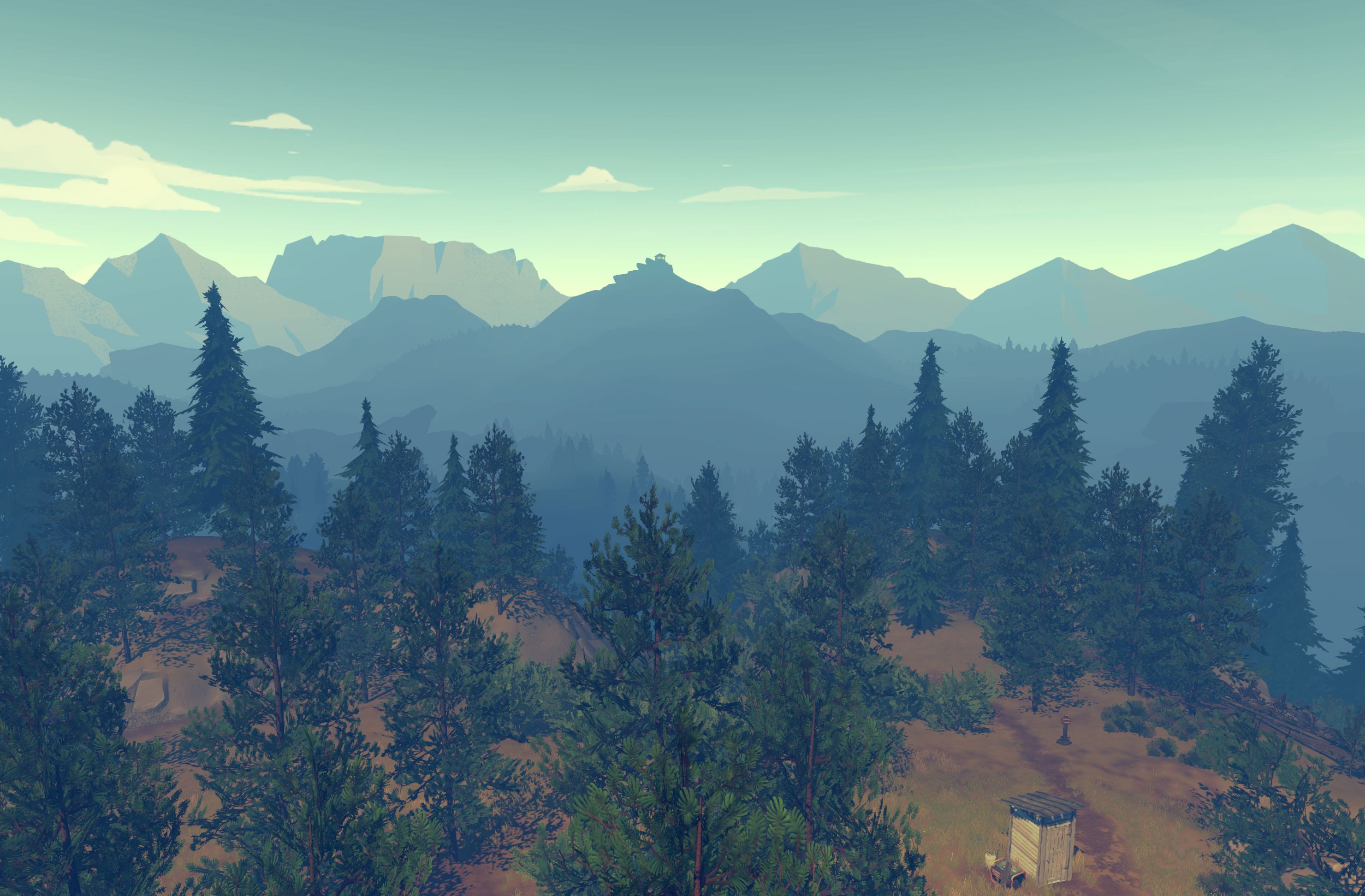 Above: You have an open world to explore, and its size will often leave you feeling small.

The first thing you’ll notice about Firewatch is that it’s beautiful. It’s a vibrant world of orange and red. The environment convinces with its swaying trees and rippling ponds.

But it goes beyond color palettes and well-animated trees. Firewatch impresses with its visual cohesion.

You play as Henry, a slightly overweight dude who doesn’t seem particularly talented at climbing. The game conveys that you’re in his body by making his legs and torso plainly visible when you look down. You can also see his slightly pudgy wrists and hand when he pulls up his radio. And you get a glimpse of his uncertain legs when you jump over an obstacle or down from a cliff.

While your character is mostly alone in the woods, you still feel the presence of other humans thanks to the items they’ve left behind. A handwritten note in a box, which you can read just by holding it up to your face, makes the world feel like it has existed long before you showed up. 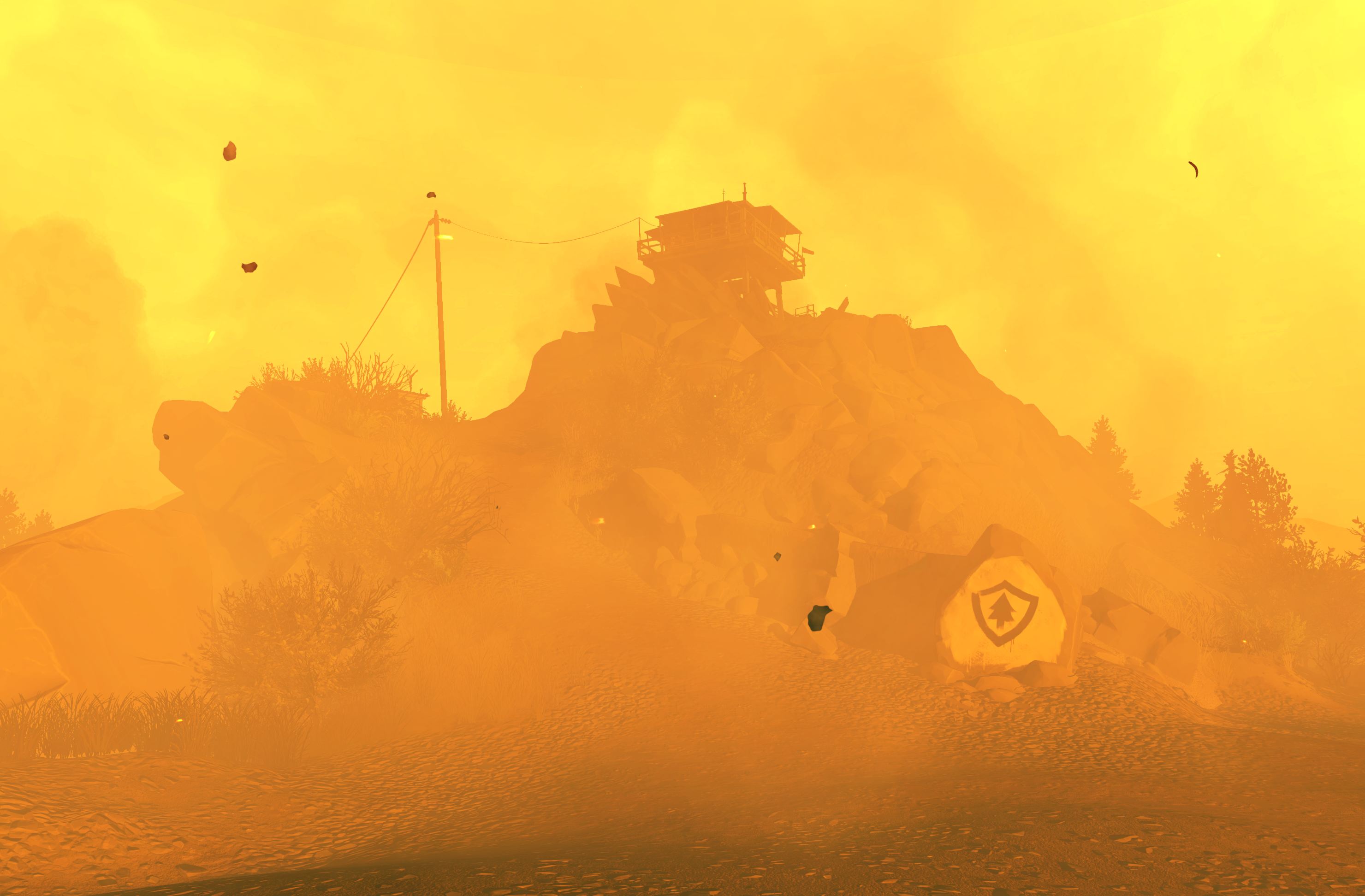 Above: Smoke-filled air as a fire burns out of control.

And when you do spot a fire, smoke fills the sky to various degrees. When it’s off on the horizon, the pillar of smoke serves as a beacon to help you keep your bearings. At night, glows like a furnace. Then, as the fire moves on top of you over a series of weeks, the smoke fills the air and makes the world feel like it is coming to an end.

All of this combined to make me feel a connection to what I was seeing.

It is disorienting and lonely

Firewatch starts by giving Henry a reason to want to get away. He was already feeling lonely, but he deals with that by wanting to go somewhere that he can get away from everyone.

But Campo Santo uses a number of tricks that force you to come to terms with what it means to really get cut off.

I only saw the vague human outlines of a handful of people during my time with Firewatch. The rest of the time, my sole interaction with others was through my handheld radio that I used to talk to Delilah — a fellow firewatcher stationed in a tower that is always visible on the horizon.

You have no way to talk with anyone else. This means all of your interactions are with Delilah or with items you find scattered around the world.

This gives you an inescapable sense of isolation. 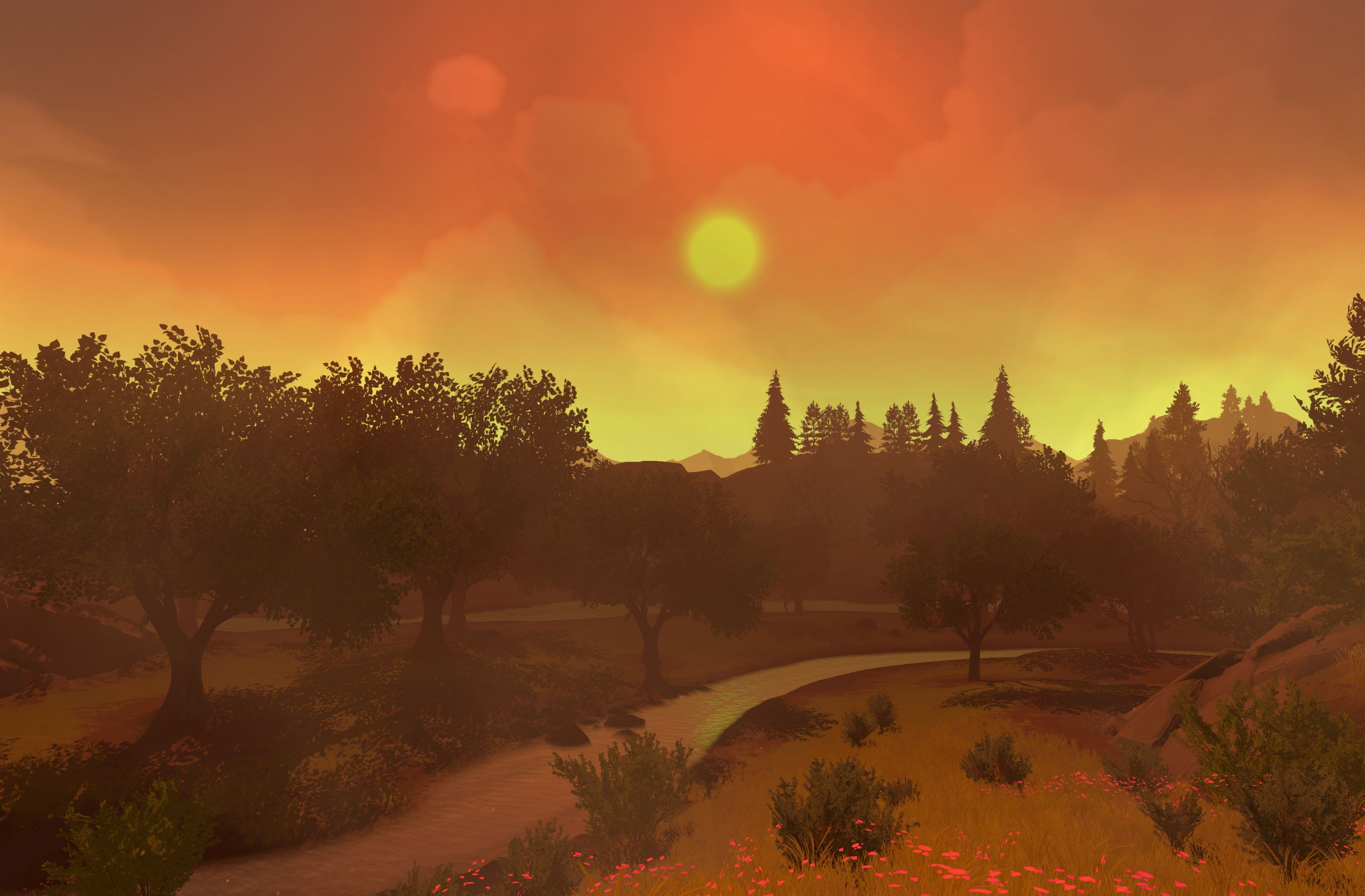 Above: You’ll learn to recognize landmarks like a stream or a rocky outcropping.

Not having any opportunity to speak with someone who isn’t a faceless woman on the other end of the radio is tough, but then Campo Santo amps this up by putting you in situations where you aren’t sure whether you should trust what she’s saying. This leads to you wonder if you can even trust what you’re seeing.

On top of this, the only tools you have to help you get around are a map and a compass. Eventually you get some extra items to make bypassing certain areas easier, but you’re still going to spend a lot of the game lost and going the wrong way. Bringing up a map and trying to orient yourself correctly is a constant reminder that you’re out of your element, which lends to a powerful sense of loneliness that is the heart of Firewatch.

Campo Santo is playing you — and it’s incredible

With that isolation, the developer turns you into putty that it expertly manipulates.

The studio has a theme in mind. I don’t want to spoil the specifics, but Campo Santo wants you to think about the reasons that a person runs away. What do people hope to find when they want to get away from their “problems?”

I know what would make me run into the woods of Wyoming to spend a summer alone looking for fires. I would go with the hope that I’d encounter some grand adventure or impersonal tragedy that I could overcome. Something that I could focus on completely.

It’s the reason I latch onto terrible events in the news. Or why I sometimes day dream about getting into a car accident and having to rescue the people around me. Having an immediate problem that is either too big to solve or potentially life threatening gives me the permission to throw away concerns about my finances or whether I remembered to take out the trash or making time to call my family.

You go to the woods to look for a fire because fire is absolution.

But when you go looking for a fire, you sometimes see them where they don’t exist. Or you misinterpret the smoke as something more deliberate and nefarious.

These feelings are exacerbated in a video game — and Campo Santo knows this. Most developers design their adventures in a way that rewards you for recognizing bizarre patterns. You’re supposed to assume aliens or secretive government scientists are responsible for everything that is happening to you. That’s part of their appeal. 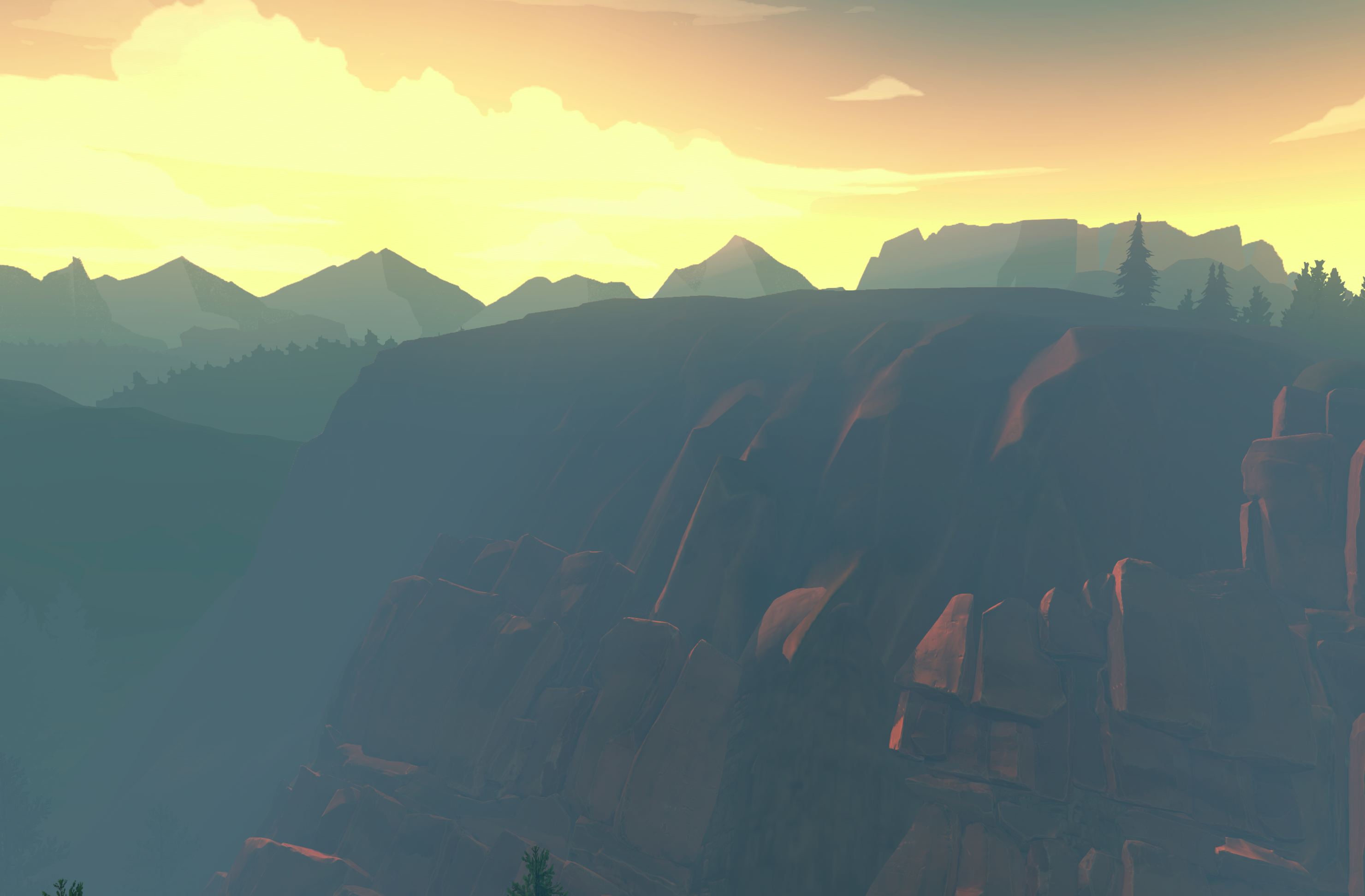 Above: The mountains surround you and are a constant reminder of your isolation.

And I think that Firewatch exposes that sort of design for what it is. Put vaguely (to avoid spoilers): It isn’t what real life is like. And it’s the kind of thinking that — if you let it go unchecked — leads to people believing the Earth is flat and world’s elite are responsible for a conspiracy to hide that fact.

Campo Santo, however, understands that you’re going into video games with those kinds of expectations. Firewatch knows that you’ve played Resident Evil, and you’re expecting the Umbrella Corporation to jump out from behind a tree. The developer uses those expectations against you, so that when the game gives you all the evidence to understand what is happening, it knows you won’t see the answer because you aren’t really looking.

This manipulation felt totally deliberate, and it revealed something about myself and my need for escapism. It helped me realize that when I run away, I’m not leaving behind my problems — I’m leaving behind my critical thinking and my reasoning. And that’s a lousy exchange.

It falls into the uncanny valley of abilities

I think Firewatch is wonderful, but if I had to point to one thing that nagged at me, I would highlight that I don’t understand why Henry would never ask how to contact the outside world for help. In this game, you speak almost exclusively to Delilah, but your character never openly asks her how to contact the U.S. Forest Service if, for example, something were to happen to her.

Not having access to those kinds of resources are important to the story. And the game does eventually acknowledge that Herny doesn’t know how to talk to anyone but Delilah. But it still seems unrealistic that anyone would hike several days into the woods with only one lifeline connecting them to emergency help.

Firewatch is special and rare.

It tackles mature subjects, but it isn’t just telling a story. It is using the medium of gaming to say something to the player. Maybe that was especially effective for me because I’ve avoided asking myself the questions that Firewatch poses. But I think it’s important that a developer can wield this kind of power, and I want more of it.

Developer Campo Santo sent us a downloadable code for Steam for the purposes of this review. Firewatch releases tomorrow for PlayStation 4 and PC.