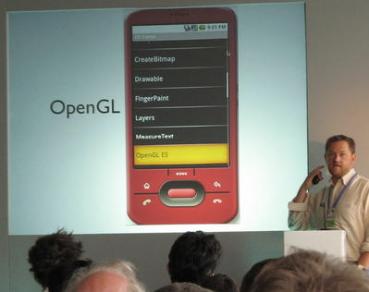 Android, Google’s new operating system for devices, will be officially unveiled as part of the HTC “Dream” phone launch on T-Mobile on September 23rd, at a press conference in New York. The phone, to be officially called the “G1” will ship on October 13th and arrive in stores on October 17, sources tell us. This is a few days earlier than previous reports suggested, but otherwise fits with what we’ve been hearing.

The Android team, which has been given every resource available from Google, has until recently been expecting excited press coverage, sources say. The reason: Android’s software is like a nicely baked cake plus a container of frosting. It’s a full stack of software components for an operating system (the cake itself) that includes customizable interfaces and features such as an “app store” (the frosting). Carriers, in the Android team’s view, just need to take Android and put the frosting on the cake the way they like, so to speak.

A lot of people will expect their Android cake to be frosted like the iPhone, but somehow better. The reality is that there’s not enough accurate information out there to say how the Dream is or isn’t comparable to the iPhone. This perception problem is a result of Google’s own strategy. Google wanted to try out Android with one device and one carrier before pushing out others.

So how much does this first device really matter? Android is itself a software platform, remember, not a direct iPhone competitor. Android is meant to drive the mass market adoption of full-featured “smartphones” and applications. It intends to make the mobile web more ubiquitous so Google can get more people using its various applications and seeing its ads. For this reason, the Android team itself actually sees the iPhone as an ally of sorts.

In the meantime, if you’re looking to do an apples-to-apples comparison of an Android phone and the iPhone, it’s best to wait until more Android-based phones come to market.

Android’s leaders have already started acknowledging the iPhone-comparison perception problems. Perhaps in the light of that uneasiness, Google’s Mike Jennings showed off the Dream handset — from a distance — at a developer conference in London this morning. Note: Jennings also confirmed that Android could run on any device, not just mobile phones, a topic we covered extensively last month. 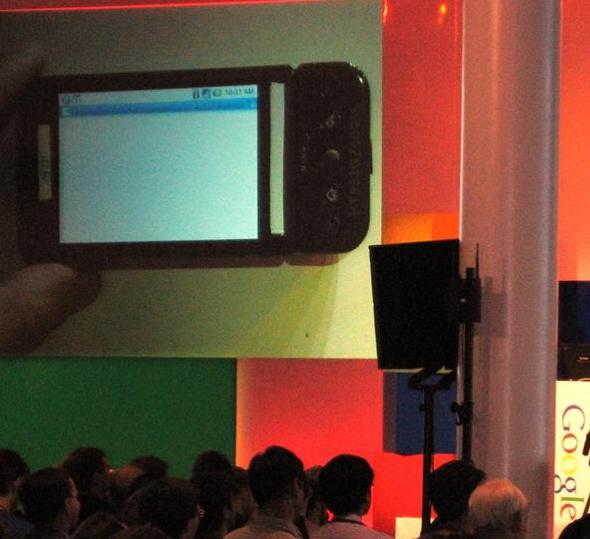 Jenning’s phone is the first official image of the Dream running Android (screenshots above, via Tech Radar). Early news about the Android launch surfaced in mid-July. Wider layers of management at T-Mobile started to see the device in August, but no reliable images of the device had appeared so far.

Expect a lot more news about Android, however things go with the Dream. In addition to T-Mobile, some other carriers in the Open Handset Alliance, such as Telefonica, are trying out Android. And today, Google invited a computer maker, Asustek Computer Inc, to join the OHA. New information coming out about Android seems rather positive. The Wall Street Journal wrote earlier this year that Android has been running into delays, but today has a more positive report: HTC expects to ship 600,000 to 700,000 units of Dream, its sources say, exceeding analyst estimates of 300,000 to 500,000 units.

The earlier Journal article cited one delay coming from Sprint’s planned phone. We’re now hearing from multiple sources that the Sprint Android phone will have “other functionality” than the Dream, and will definitely be out by 2009.

Matthaus Krzykowski and MG Siegler contributed to this article