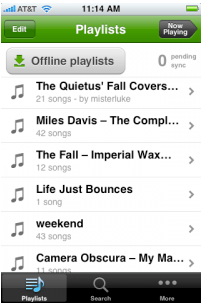 Spotify, the Swedish streaming music startup which has racked up more than 6 million users in Europe, has released a first glimpse at its much-awaited iPhone application. Spotify’s mobile efforts have been talked about as a potential iTunes killer, or even a rival to piracy, because of the application’s ease-of-use and comprehensive library of more than 6 million tracks. It resembles iTunes, although users stream the songs instead of owning them.

”We want to be better than piracy,” said Jim Butcher, a Spotify spokesperson. ”We want to provide a legal alternative to people that’s at their fingertips.”

On the app, you can search for songs and build a playlist, all without owning the tracks. On a Wi-Fi connection, songs play continuously although there are lags on the Edge and 3G networks, according to Wired.

The iPhone app comes with a key feature: you can cache playlists to listen to when the AT&T network fails or you lose connection. You can store up to 3,333 songs in Spotify playlists on the iPhone, which is 10 days worth of music. 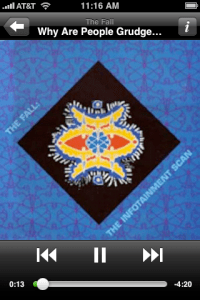 Spotify plans to enter the U.S. market by the end of the year with the app, but it needs both approval from rights holders and from Apple. The company said the app should be available to premium subscribers in a few weeks in Apple’s store. Their developers also demoed an Android application in May at Google I/O, for which they plan a late summer launch.

For users, Spotify has three models: One is free and ad-supported, another is subscription based at £9.99 a month and the last is a 99 pence day pass. The company is adding about 10,000 tracks a day.

The company took a round of funding of undisclosed size from Scandinavian venture capital firms Creandum and Northzone in September 2008.