Electronic Arts and its DICE studio revealed gameplay of its first Battlefield 1 expansion pack, dubbed They Shall Not Pass, at an event at EA headquarters last week. I played the expansion for a few hours and was impressed with the careful balance of the maps in the French Army’s homeland.

Battlefield 1 was a great game that told of the sacrifices that soldiers made in the Great War. But if I had to name a flaw in the original Battlefield 1 campaign, it would be that each of the vignettes focused on lesser-known theaters in the war, from Palestine to the air war.

They Shall Not Pass takes you directly into the meat grinder of trench warfare with battles such as Verdun, where the French and German armies made huge sacrifices in the name of grabbing small patches of territory, said Valerian Noghin, lead designer of They Shall Not Pass, in an interview with GamesBeat.

“That’s something we heard from people about the main game, that they wanted more trench warfare, more close combat,” Noghin said. “That’s also true of Fort de Vaux, which has a lot of interiors and a lot of close combat. We’re finally happy to bring that along.”

They Shall Not Pass 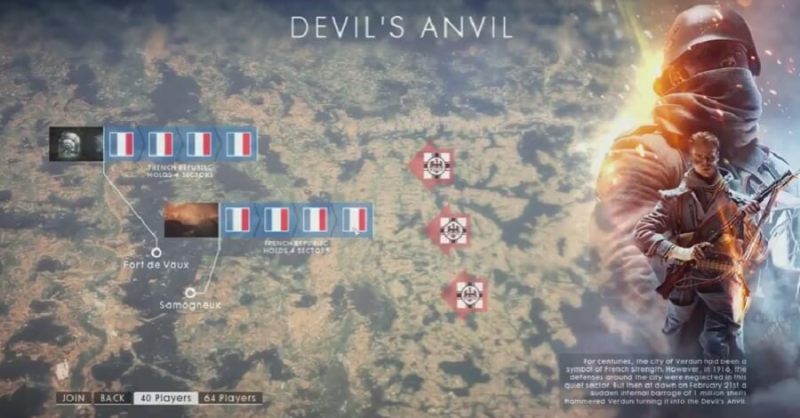 Above: The Devil’s Anvil, where the Germans vowed the bleed France white.

The expansion has four new multiplayer maps set on the Western front, including the furnace of Verdun Heights just after a devastating German artillery bombardment. Nearly a million soldiers on both sides died in what was known as the Devil’s Anvil in 1916. The Germans attacked, gained some ground, and both sides poured reinforcements into the fray.

I really liked the way the forest was constantly burning in the background on this map. It made you feel like you were fighting in the kind of hell that the soldiers really experienced. The ambient sounds of battle make you feel like you are on the ground, fighting for your life. You can hang back and snipe, but somehow, it always seems like someone is sneaking up on you. You can go charging in, but grenades and machines guns can turn heroes into corpses very quickly in the middle of the map. 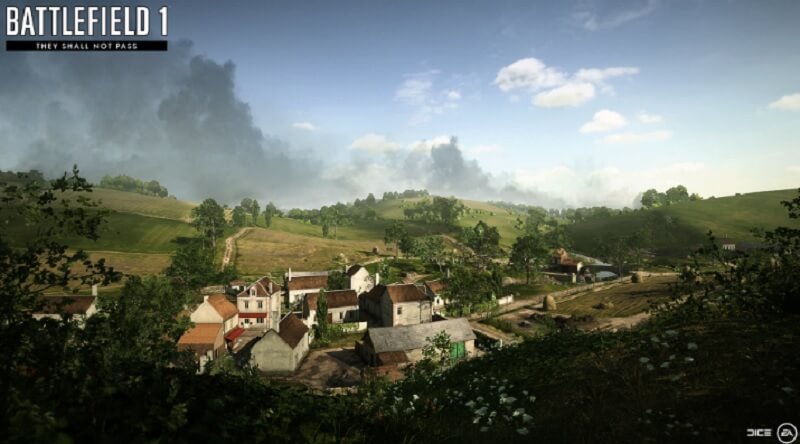 Above: Soissons is one of the new multiplayer maps in They Shall Not Pass.

For a few hours, our preview group rotated through battles with the new fighting modes and maps. We had dozens of players in each match. It was pretty hard to stay alive, but I really enjoyed the struggle. The fighting is intense, as DICE’s designers have a knack for concentrating a lot of action in just a few bottleneck areas.

At first, I tried to hide in the buildings in the small town complex in Verdun Heights. But as our team went on the offensive, I happened to spawn on one of my squad mates who had sneaked around to the far edge of the map. Soon, our whole squad had respawned there, and we came down upon the enemy from behind. I managed to get three kills at close quarters in the woods, all because one of our teammates flanked the enemy. That was the only such advantage I had all day long.

Another map featured fighting in the bowels of Fort de Vaux, a concrete monstrosity where battles raged in the gas-filled corridors. I had to frequently remember to quickly don my gas mask to avoid dying from the green fumes. Lots of grenades flew back and forth on this map, and we had to constantly peer around corners to shoot. We fought hard for the victory points within the fort.

The maps also include Soissons, where a big tank battle took place on the banks of the river Aisne, and a map called Rupture, where we were constantly running back and forth to defend or take over hot spots. In Soissons, it was fun to board the big tanks and play gunner alongside the driver. But once in a while, the Germans got lucky and took out five of us riding in a tank with an anti-tank grenade. 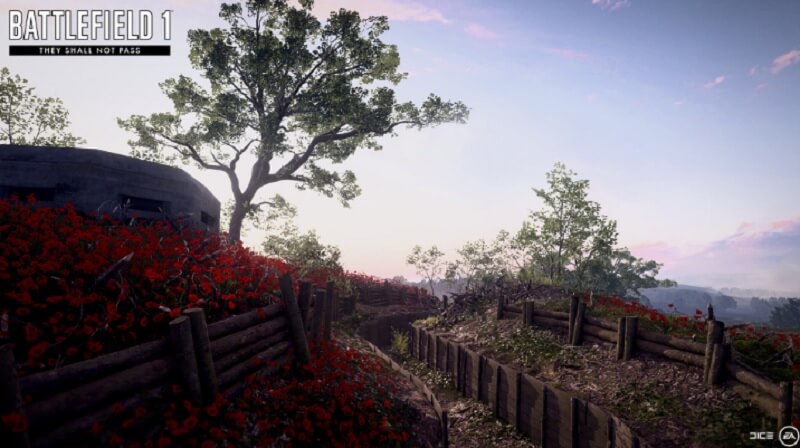 In Rupture, I happened to get on a good team that was very organized about using its squads to take victory points. As soon as one was taken, we moved on as a group to the next one, or defended one that the enemy was trying to take. We kept running back and forth, and captured twice as many victory points as the enemy did. We saw how superior organization made a difference in the big picture.

Early on, I made a good choice of checking out some other weapons. I picked an experimental machine gun which had a gun sight on it. I could almost snipe with the gun, though it was hard to really do that because the gun had so much kick after the first bullet. But it enabled me to take out some enemies at a longer range, without being as vulnerable as a sniper to close combat. It was far better than the scope-less machine gun that came as the basic assault rifle for the French. If you’re like me and have trouble making precise shots, the experimental machine gun is a must.

A new game mode called Frontlines is a unique mix of Conquest and Rush in a tug-of-war battle. I enjoyed this one, as you had to take over the ground little by little with a constantly shifting front line. It moved very fast, and that meant every death or kill mattered in where the front line settled.

Battlefield 1 Premium Pass members get two-weeks of early access to They Shall Not Pass starting on March 14, and everyone can access the expansion on March 28.