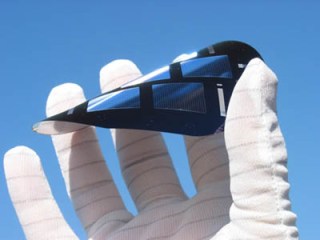 Uncertainty about First Solar’s future operations led investors to smash the company’s shares in trading after the bell today after the company failed to grow its revenues in the first quarter this year — a sign of weakness for the last major independent solar panel manufacturer in the United States.

Net income for the solar panel provider fell 33 percent to $116 million in the first quarter this year, down from $172.3 million in the first quarter last year. The company beat Wall Street estimates by bringing in $1.33 in earnings per share, up from the $1.13 expected by analysts. FirstSolar also beat estimates on revenue, bringing in $567.3 million when compared to Wall Street estimates of $554.6 million.

But that’s not why First Solar has opted for thin-film solar panels. The company has focused on driving the costs of manufacturing down to bring costs down across the board. First Solar was one of the first companies to bring the cost-per-watt of solar energy below $1 — a critical step in making solar power more competitive with typical energy sources.

“There hasn’t been that much innovation in efficiency, really what’s happened in the solar equipment universe is that there’s been a greater focus in process engineering than in new technology development,” said Ed Fenster, chief executive of SunRun, which leases out and installs solar panels on residential homes. “The solar panel you install today is similar to what you installed in 1980, it just costs one-sixtieth of the price.”

But beating estimates still didn’t help the fact that First Solar’s revenues failed to grow significantly — the company also brought in $568 million last year in the first quarter. First Solar also left its outlook for the rest of the year unchanged, which implies that no new headwinds against solar power have cropped up since the company last released its guidance for the remainder of the year.

First Solar has to protect its empire against major Chinese competitors like SunTech and JA Solar, which have been growing quickly and opening new projects across the world — which includes the U.S. Foreign solar power competitors benefit from low-cost manufacturing and a lax regulatory environments. First Solar also became the last U.S.-based independent solar panel manufacturer after French oil company Total bought a majority stake in SunPower.

Investors slammed the company, bringing its shares down around 7.5 percent, to $124.75, in extended trading today. There are also concerns about the long-term viability of the company after a number of high-profile insiders sold off large portions of their shares and left the company, investment company Kynikos Associates president James Chanos said in an interview with CNBC.