Both of the new Charge bracelets share the same general shape as Fitbit’s older Force fitness tracker. The new Surge fitness watch is larger with a spacious display that’s tilted up toward the user’s eyes. 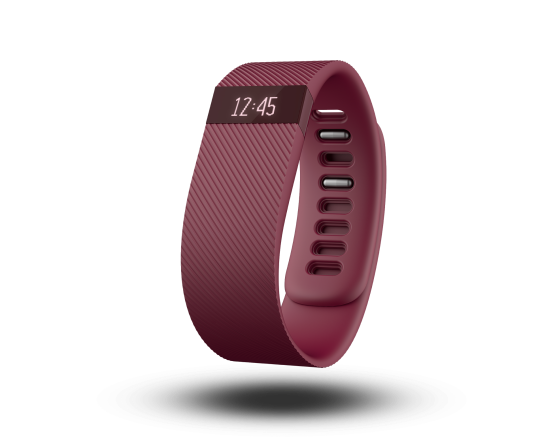 The $130 Charge offers some features normally seen in smartwatches. It displays caller ID data on the wrist so users can see who’s calling on a Bluetooth-paired smartphone (iOS, Android, or Windows Phone). Text messages also show up on the display.

The Charge offers more traditional fitness tracker features, too, with some incremental innovations. It tracks steps taken, distance traveled, calories burned, active minutes and sleep. It monitors workouts and presents workout summaries on a dashboard in the Fitbit app.

The device, which Fitbit says is comfortable enough to wear while sleeping, monitors (and displays in an app) hours of quality sleep and how many times the wearer wakes during the night. A vibrating alarm wakes the user at the right time during the sleep cycle.

Fitbit says its new device will go a week until needing a recharge.

The Charge is available now in black and slate colors, with blue and burgundy colors coming later.

(Health wearables are just one of the hot topics that will be discussed at VentureBeat’s HeathBeat 2014 conference Monday and Tuesday in San Francisco. A few tickets are still available. Register now.) 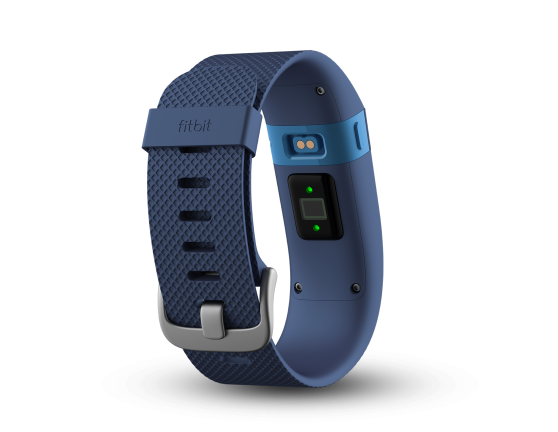 The $150 Charge HR does everything the Charge does but comes with a small optical heartbeat sensor on its bottom side. With the heartbeat information, the device can better calculate how many calories the wearer has burnt throughout the day or during workouts.

The heartbeat data can be especially useful when making correlations between caffeine intake and restfulness, for example. During workouts, the monitor is helpful for making sure the user’s heart rate stays in an aerobic zone.

The heartbeat sensor pulls some battery power, so Charge HR users will have to charge up every five days instead of every seven.

The Charge HR will become available in 2015, in black, plum, blue, and tangerine colors. 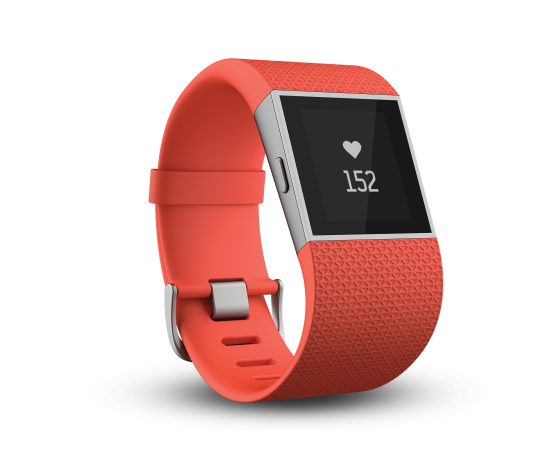 The Surge packs a 3-axis accelerometer, a gyroscope, a compass, an ambient light sensor, and the optical heartbeat sensor. An altimeter detects elevation.

The device includes all the features and functionality of the Charge HR but adds in a GPS radio so that runners and bikers can map their routes without having to drag a smartphone along. You can also use the Surge to control the music player in a paired phone, a feature very few people in the real world will likely ever use.

The device has a large backlit display, which is tilted upward toward the user’s eyes. The extra space created inside the watch by that upturned screen may allow for a larger battery (the device needs charging every seven days) and the GPS radio.

The Surge will be available in black, blue, and tangerine in 2015.

“Our mission has always been to deliver innovation through exceptional, wearable design in a way that empowers consumers with greater knowledge of their overall health,” said Fitbit CEO James Park in a statement.

“With the addition of these new products, Fitbit offers the widest variety of trackers — at affordable prices across all mobile platforms — ensuring that everyone can find the right fit for their lifestyle and their goals,” Park said.

Fitbit now sells six activity trackers and its Aria Wi-Fi scale, all of which sync wirelessly to more than 120 iOS, Android and Windows mobile devices.