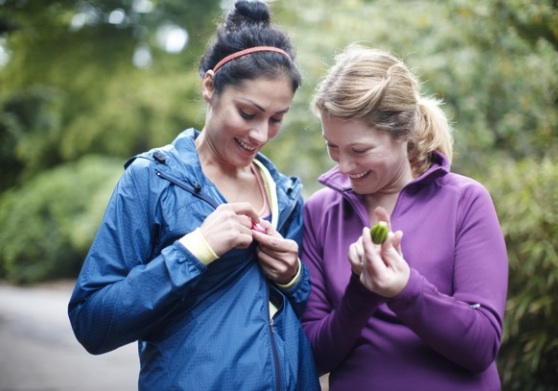 Both devices allow you to wirelessly synchronize your Fitbit performance with a Bluetooth 4.0 compatible smartphone (like the iPhone 4S or Samsung Galaxy S III). You can even synchronize in the background now, without even opening up the Fitbit app on your phone. That’s a major improvement over the Fitbit Ultra, which can only synchronize to desktop computers with a special wireless dongle.

Fitbit’s two-pronged approach with its next generation of devices could help the company better compete against the popular Nike+ Fuelband, which is more expensive at $149. In particular, Fitbit hopes to make inroads with families that want to track their performance together with the Zip device, Fitbit cofounder and CEO James Park told VentureBeat in an interview last week. The company is also considering family bundle pricing if the Zip takes off.

The addition of wireless synchronizing is a clear shot at one of the Nike+ Fuelband’s most useful features. But according to Park, the two companies aren’t playing a zero-sum game. “We’re sold in very different places, and if you look at our marketing we target very different people,” he said. “I think the great thing about wearable activity monitors is that there’s not going to be one form factor.”

With the Fitbit Zip, available today, the company has designed a friendly activity tracker that’s somewhat reminiscent of the Tamagotchi virtual pets from the ’90s. It sports a simple black and white display which you can tap to jump through various statistics, like total steps taken every day, total distance, and the amount of calories you’ve burned. You also don’t have to worry about recharging the Fitbit Zip, since it’s powered by a single watch battery, which the company estimates will last around six months.

For its flagship Fitbit One, the company has basically refined its existing Fitbit Ultra design. The new tracker is 40 percent smaller than the Ultra, and it also adds a silent alarm clock to gently wake you up. In addition to all of the activity tracking that the Fitbit Zip covers, the Fitbit One also tracks your sleep (something that the Nike+ Fuelband doesn’t do).

Unfortunately we don’t have a firm release date for the Fitbit One just yet, but the company says it’s coming in late October.

Both new Fitbit devices let you explore your fitness data on Fitbit.com and through the Fitbit app on iOS and Android. Come October, the company will offer real-time leaderboards so you can compare your performance with friends, messaging to your friends, and you’ll also be able to get alerts on your phone as you approach your fitness goals.

In addition to Nike’s FuelBand, Fitbit also competes with Striiv’s step counter, and Jawbone’s Up wristband (which is off the market now, but is due to return soon).

I had a chance to test out the Fitbit Zip for a few days, and it works as advertised. On one busy Saturday running around New York City, I learned that I had walked more than four miles. Setting up the device for wireless syncing on Fitbit’s new iPhone app was also a cinch. At a mere $60, the Fitbit Zip’s cute personality could win the company some new fans, especially among health conscious parents.

After raising $12 million in a third round of funding earlier this year, Chicago-based Fitbit has raised a total of $23.4 million from Foundry Group, True Ventures, and others.