Fitbit has announced new wearables Fitbit Versa, which runs the upcoming Fitbit OS 2.0, and Fitbit Ace. Both are available for preorder today. Versa is the company’s second, cheaper smartwatch (starting at $200, versus Ionic’s $300 price tag) and ships in April. Ace is the company’s first wearable for kids (it’s really just a rebranded Fitbit Alta) and will hit retail stores in Q2 2018 for $100.

The two devices are part of Fitbit’s attempt to broaden its appeal with consumers and the health market in general. These are mass-market devices, aimed at putting the company back on top — Apple dethroned Fitbit in wearables for the first time in Q4 2017.

“Our mission is to make everyone in the world healthier,” Fitbit cofounder and CEO James Park said at a press event in New York City. “We’re going to continue to help consumers manage their weight, get more active and fit, sleep better, and reduce their stress. We’re also going to help people manage more serious health conditions: diabetes, heart problems, sleep disorders, and mental health. We’re going to do this across all ages, not just adults, but kids and seniors.”

The Versa, which apparently stands for versatility, is best understood when compared to its premium older brother. Fitbit Ionic is bigger, has a larger screen, and comes with slightly more features. For $100 less, you’re getting a smaller watch and screen (although Fitbit calls it “the lightest metal smartwatch in the U.S. market”), with slightly lower battery life (up to four days, instead of up to five days), and no built-in GPS.

One other feature missing from the Versa is Fitbit Pay, but only in select countries. In North America and Latin America, you’ll need to buy a Fitbit Versa Special Edition (an extra $30 for a lavender band with a rose gold aluminum case or a charcoal band with a graphite aluminum case) to get Fitbit Pay. Outside of the Americas, Fitbit Versa comes with an NFC chip and Fitbit Pay.

Versa’s hardware is encased in anodized aluminum while the display is a touchscreen with brightness of up to 1,000 nits. Like any watch, Versa has multiple accessory options: standard bands (peach, gray, black, periwinkle, or white), Horween leather (cognac brown, midnight blue, lavender, or saddle), stainless steel links (black, silver, or tapered silver), and metal mesh bands (black or silver). 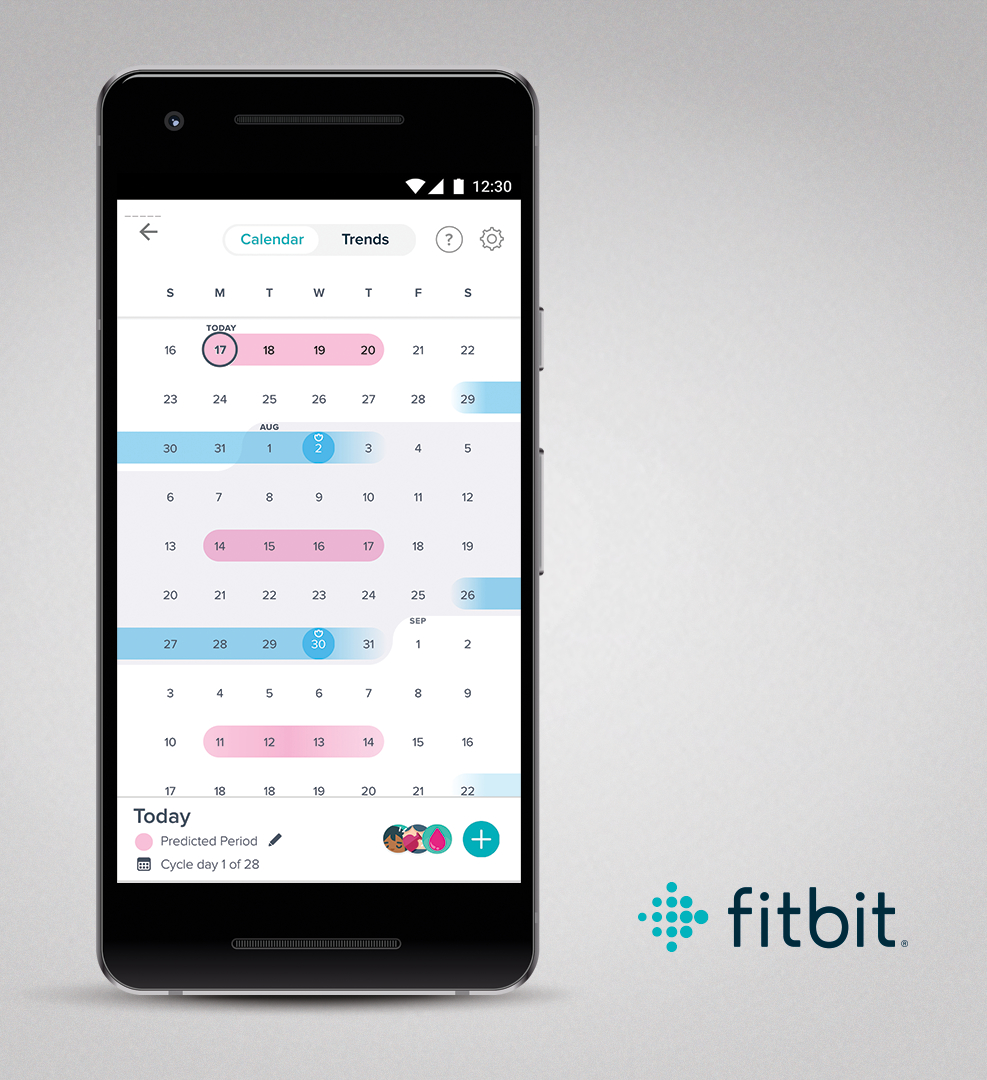 Fitbit today also announced new female health tracking options, which will arrive this spring as an update for the Ionic and Versa, as an on-device feature, and for the Fitbit app. Features include:

The addition of period tracking is not by chance. Fitbit wants Versa to be its wearable that attracts women. 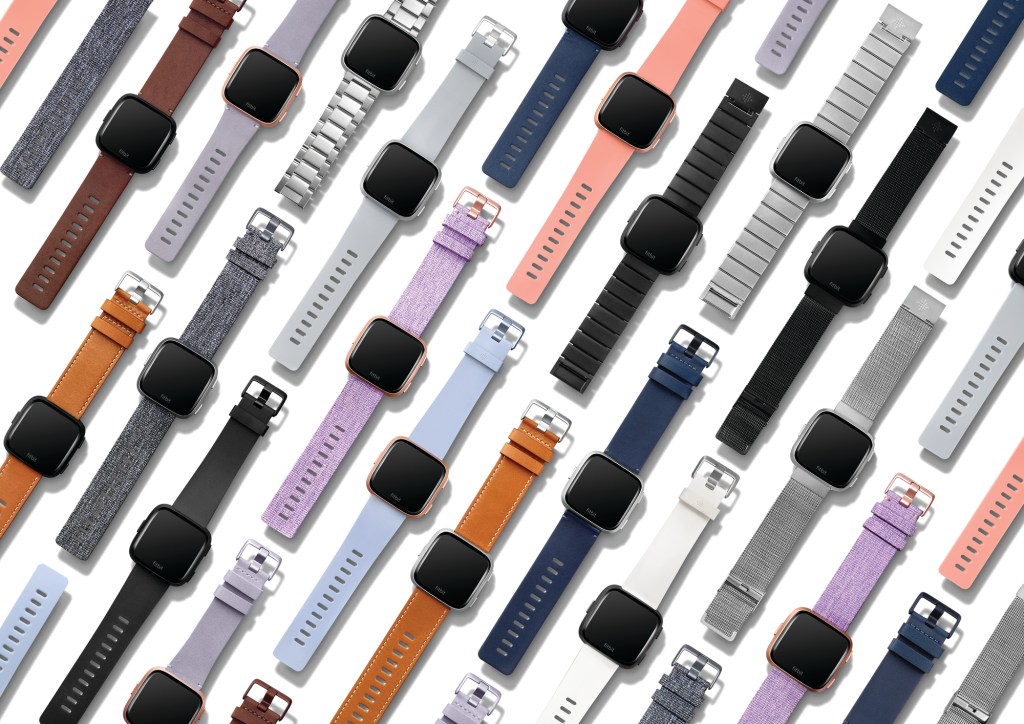 Like the Ionic, Versa runs Fitbit OS, the company’s smartwatch operating system. Versa will ship with Fitbit OS 2.0. Ionic users will get version 2.0 as an update later this month.

Fitbit OS 2.0 includes a new personalized dashboard that lives on the smartwatch itself, as opposed to simply in the Fitbit app. The dashboard lets you see your daily and weekly health and fitness stats, historical activity, heart rate, exercise summaries, motivational messages, tips and tricks, and daily guidance — all on your wrist. Fitbit also promises the dashboard will become more personalized over time with reminders, celebrations, logging, insights, sleep summaries, and social challenges (prompts to take actions based on your data) coming later this year.

Fitbit is also launching its first online simulator to let developers test their apps and clock faces for Ionic and Versa without having to buy a device. This is all the more important as Fitbit now has two smartwatches with different size screens — developers will need to test that their designs work on both as expected.

The Ace is best understood if you factor in the saturation of the activity tracker market. Most people who have a fitness band either don’t want another one or want to upgrade to a smartwatch. If Fitbit wants to keep selling these types of devices alongside its new smartwatch lineup, it needs a new segment to target.

Did you know that kids today aren’t getting enough exercise?

Fitbit claims the Ace “makes fitness fun for kids while inspiring the entire family to build healthy habits together and help fight decreasing levels of activity in children.” I cannot picture parents buying Aces for their kids, especially given that most parents today did not grow up with gadgets. The idea that another gadget will help kids use fewer gadgets sounds completely backwards to me. Maybe Fitbit could make a play by partnering with schools or something.

If I haven’t lost you yet, the Ace is designed for kids ages 8 and older. It has a battery life of up to five days, features a showerproof wristband (available in electric blue and power purple), and encourages the wearer to be active via the following features:

Fitbit is also introducing family accounts so parents can control who their kids connect with in the Fitbit app. Privacy is naturally a big concern, so the family account is compliant with Children’s Online Privacy Protection Act (COPPA). Parents can thus manage who their children connect with and what information is visible in the Fitbit app via parent view and child view settings. For kids with smartphones, there’s even an option to make sure they get notifications of a parent’s call directly on their wrist.

Today marks a bold bet by Fitbit. To those who argue wearables are still gimmicks, the company is saying nope — not for anyone who cares about fitness. And, of course, everyone cares about fitness — whether they do something about it is a different story.

Fitbit believes its devices have gotten good enough to help the lazy masses get fit. Now it’s up to the marketing team to convince those lazy masses that these devices will motivate them to get fit.

The company’s very survival depends on it.