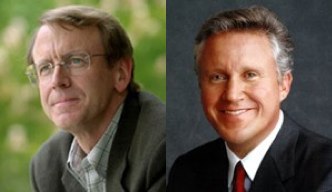 As important as the energy industry is, there’s no industry in the U.S. that is as completely screwed up.

A government official in Washington, requesting anonymity, recently told me: “It’s the most f***ed up system. Anyone thinking about launching a company in this space should put a bullet in their head.”

I’ve been making the rounds in recent months, talking with industry and government leaders about the supposed reform effort aimed at creating a so-called “smart grid” for our energy network. I’ve been astounded by how few answers people have about it. The Obama Administration has allocated $4 billion for it (more details here) but there’s no agreement yet about how exactly the grid will be built. Everyone is saying it is coming, but when you ask what it’s going to look like, when it’s going to come, and who is in charge, they just stare back at you with a blank face and shrug.

That’s why it’s encouraging to see some business leaders finally starting to speak up: John Doerr, partner at venture capital firm Kleiner Perkins (pictured top left) and Jeff Immelt (top right), chairman and chief executive of General Electric, today have penned a piece laying out five demands (see bottom) for change in our energy policy. It’s worth a read. Sure, these guys have huge financial interest in seeing change (Doerr invests in clean-tech companies, and Immelt’s company arguably has the most to gain if the energy system is modernized), but that doesn’t lessen the importance of their argument any — in fact, it may strengthen it.

The context: The smart grid is supposed to be our way to making the energy grid more efficient — to save us both money and clean up the environment. We’ll build the grid with new technology such as smart meters in the home and improved communications — so that the cleanest possible energy is routed through the grid to the end-user in the shortest, cheapest possible way. The grid will include a “two-way” component, so that people with solar panels will be able to pump their own electricity back on to the grid during times they have excess supply.

But while utilities and power meter companies are likely to scramble to apply for the funds, there’s no coherent national policy yet ensuring that they actually commit these funds to improving the overall system. Here’s the problem: Utilities are scrambling to apply for grants from Obama’s money spigot, throwing all their focus on grabbing those lucrative grants while possibly shirking responsibility to ensure their overall production and distribution are more efficient.

Herein lies the problem, and one that Doerr and Immelt touch upon: Most energy policy still lies in the hands of the 50 states — which negotiate deals with local utilities — meaning there’s no coherent national policy. The utilities most often don’t see efficiency as being in their interest. And as I’ve written before, there doesn’t seem to be a business model that works. In other words, Washington has only carrots (the funding) and no stick, and this stubborn donkey is happily chomping away and going nowhere.

“The question is: Who wants the smart grid?,” Matt Trevithick, an energy-focused venture capitalist at venture capital firm Venrock recently asked me during an interview. “Sure, as investors and consumers, we’re all interested in it. But where is the market pull?” The incumbents (utilities and large companies such as GE) have so much power, it’s next to impossible for startups to bring about change in this industry. Trevithick asks, but doesn’t answer: “Is there white space for entrepreneurial companies to innovate?” And this is the guy who is supposed to be funding them. So we’re really all sitting here in the dark about one of the most urgent issues of our day: Both the White House and experts say we need to do something now to avoid chocking the planet out of existence within the next century.

Below are what Doerr and Immelt are proposing. We at VentureBeat plan to be doing more reporting in this area as the policy statements and money spending unfolds (or doesn’t unfold) in Washington.

— Get the rules of the road right for utilities. We must make our utilities a driving force for repowering America, driving efficiency through incentives, a renewable electricity standard and a national unified smart grid.

— Set energy standards that grow steadily stronger. America should strive to have the most efficient buildings, cars and appliances in the world. The savings will land in the pockets of U.S. consumers and businesses.

— Get serious about funding research, development and deployment, at scale. The federal government currently spends only $2.5 billion on clean-energy R&D a year — 0.25 percent of our annual energy bill. Sen. Jeff Bingaman’s Clean Energy Deployment Administration is a good idea that would be fast and flexible. But more such programs are needed.

— Fulfill President Obama’s commitment to “become the world’s leading exporter of renewable energy.” We need a robust trade policy that seeks to open markets abroad — including the Chinese market — for U.S. clean-energy products through new trade agreements. Such policies unleash American competitiveness disciplined by market forces. This is widely endorsed by U.S. companies that compete internationally and by the broad-based President’s Economic Recovery Advisory Board.