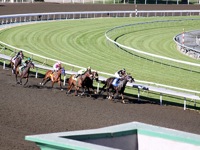 Adobe Flash, the company’s platform for web applications and video, is already on virtually every computer everywhere, but the latest version is on an even faster track to world domination. Flash Player 10 and AIR have been downloaded a record number of times, the company announced today.

During the two months after Flash Player 10 was officially released in October, it was installed on 55 percent of Internet-connected computers, and is on track to be installed on 80 percent by the halfway point of 2009. Unfortunately, Adobe didn’t include any past adoption numbers for an apples-to-apples comparison; it only says Flash 10 is “far outpacing the installation rate of past versions of the software.” The company previously told me that the last version of Flash reached 62 percent market penetration in three months.

Still, the rapid growth underlies Flash’s continuing dominance. Flash 9 is now on 98 percent of Internet-connected computers — which is, y’know, a lot — and Flash 10 will presumably match or exceed that number. In comparison, Microsoft’s competing Silverlight platform has been making inroads (for example the official presidential inauguration site used Silverlight), but had only reached 25 percent penetration as of last October.

With AIR, meanwhile, the “record numbers” claim is a bit disingenuous, since there aren’t any previous versions to compare it to. There are hardly any comparison points at all, since Adobe was the first big tech company to release a product like AIR, which allows developers to build hybrid web/desktop applications. Still, more than 100 million downloads in less than a year gives Adobe a healthy advantage over newer competitors, like Sun’s just-released JavaFX.

Update: Adobe tells me Flash Player 10 has been adopted around 60 percent more quickly than Flash Player 9, which reached 35 percnet market penetration in its first two months. You can see more numbers here, and an illustration of relative adoption rates here.