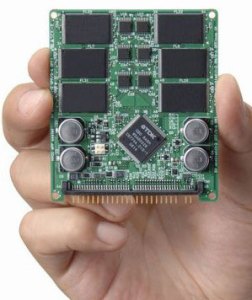 The bad times are taking a toll among the makers of flash memory chips. SanDisk reported today that it lost a whopping $1.86 billion in the fourth quarter, while Spansion said that its chief executive, Bertrand Cambou, is resigning today.

Milpitas, Calif.-based SanDisk said revenue for the quarter was $863.9 million, down from $1.25 billion a year ago. The loss of $8.25 a share included a $1.91 billion one-time charge. That includes $1.02 billion in a write-off of goodwill and intangible assets. Not counting the one-time items, the loss was $1.65 a share. Analysts expected the company to report a loss of 60 cents a share on revenue of $766.7 million, according to Thomson Reuters.

Cambou is stepping down as the company looks for a buyer, a move announced last month. Boaz Eitan, executive vice president at Spansion and a board member, will take over as interim president. Eitan came from Saifun Semiconductors, which Spansion acquired last year. Cambou will continue as a consultant. Cambou had been CEO of Spansion since it spun out of Advanced Micro Devices in 2003.

Both companies are suffering from fierce price wars and big drops in demand due to the economic crisis. Flash memory is used in everything from handheld music players to cell phones.