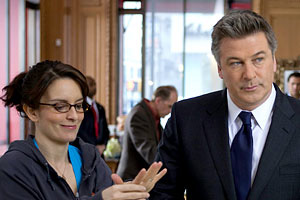 Hollywood execs from several large entertainment media companies have reportedly told Apple that they’re not going to port their existing content from Flash to Apple’s iPad format. The New York Post namechecks Time Warner and NBC Universal, and also implies that there are others.

The names dropped by the Post are critical. Time Warner is second only to Vivendi in size among entertainment conglomerates. NBC Universal, now jointly owned by GE and Comcast, is also an entertainment giant built from many disparate companies, as self-parodied weekly by NBC’s sitcom 30 Rock.

Post reporter Claire Atkinson says that “media companies are feeling emboldened in their rebuffing of Apple by the launch of rival touch-screen tablet devices, such as the ones coming from Dell Computer and Hewlett-Packard.” One exec cited the recently announced Google TV as another reason not to let Apple dictate media formats.

These executives are usually portrayed by tech pundits as out of touch on technology trends and futures. But the undeniable success of Hulu, which carries content from both Time Warner and NBC Universal, gives credence to the idea that Flash-only content could succeed for a wide audience, forcing Apple to concede and support Flash, or to suffer reduced sales of its media-playing products.

If the past is an indicator of the future, consumers will put up with less-than-perfect user experiences if it gets them the TV, movies and music they want. That applies to both Hulu and BitTorrent. So a major media stance against iPad-native content could very well work.

Most likely, media companies will pick and choose what content to convert for Apple, rather than porting all or none. Time Warner already does this by offering 30 Rock both on Hulu and in the iTunes store for Macs, iPhones and iPads. What’s up for grabs is how much of their content the big players will place on the iPad.