Flashbreak has raised $2 million in funding for live mobile game competitions that reward gamers with real-money rewards. It’s sort of like HQ Trivia, in that everybody gathers at a particular time to compete in a show.

Paris-based Flashbreak raised the money from French venture capital firm Alven and Kima Venture. It’s a kind of mash-up of esports meets mobile gaming. The app is a hybrid of both in-house games combined with a publishing platform for outside vendors to expose their own offerings to Flashbreak gamers.

The host adds live and frenetic commentary to the competition while hundreds of players compete in real-time to achieve the best score. The top 200 players split the prize money. Flashbreak is available on iOS and Android.

Each show features a different game and lasts 10 minutes. New games are featured every week. To increase their chances of winning, users are encouraged to practice in between the live competitions by downloading the full version of the featured game. Flashbreak is paid by the developers of the featured game on a cost per install” (CPI) basis, or how frequently the games are downloaded. 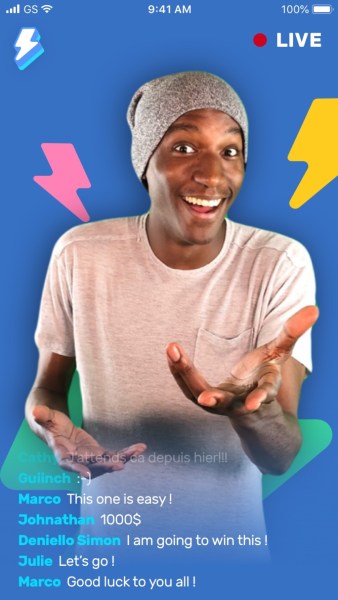 Above: Flashbreak hosts do live commentary on mobile game competitions.

“Flashbreak is a new way to showcase my games, engage with users and generate qualified downloads,” said Philipp Stollenmayer, a game developer with 20 million downloads.

The founding team includes Romain Salzman, who launched the Devialet Phantom speaker in the U.S., and David Jilli, who cofounded an audio startup acquired by Devialet. They started the company in January 2018, and they have eight people.

“Flashbreak is closer to HQ Trivia than to Skillz: in Flashbreak, there is one competition, taking place in our app, and everybody competes live at the same time,” said Salzman, in an email.

Skillz has thousands of people competing in a decentralized fashion in each game app. Skillz gives away real-money prizes for skill game competitions, and it has a revenue run rate of $400 million.