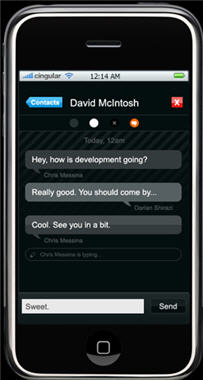 FlickIM is a new lightweight chat feature designed specifically for the iPhone.

More significantly, it’s the first feature produced by a group of nine young developers led by two former UC Berkeley students, Darian Shirazi and David Macintosh, both 20 years old. Their company, Next3, seeks to make communications easier for the 20-something generation, and has just raised $1.6 million in a first round of financing led by Alsop Louie Partners.

The company is building a more ambitious application, to be released in September, though it remains quiet on details.

This chat application took them a week to build, but the diversion was worth it because it fills a void on the iPhone, they said. While iPhone handles SMS well, it doesn’t have a good chat application. The iPhone is the phone of choice for the super-connected generation, said Shirazi, and he already all his friends at Facebook and elsewhere are using it over competing chat products, such as Meebo, he notes. Whereas FlickIM takes four seconds to load using AT&T’s Edge network, Meebo can take more than 20 seconds — in part because Meebo seeks to support multiple features and IM clients. FlickIM is designed to focused on one thing, said Shirazi: It only supports AOL’s AIM, because that’s the biggest, most popular IM platform.

FlickIM lets you manage several chat windows at once, fitting six conveniently on the screen (you click orange bubble icons to select the window you want to participate in).

To send a Youtube video over chat, a user creates a link by writing /Youtube/movie name. Or for an iTunes trailer, you type /t/trailer name. It uses a Google API to find the video, a technology is good enough to find most videos being searched for on a first try. FlickIM will soon create a feature that gives you an easier way to determine whether you’ve selected the video you’re searching for. It is built using Amazon EC2, to help it scale.

Shirazi recently wrote a an opinion column for VentureBeat about the importance of “nationalism” as a driving force for start-ups. Earlier he worked at Fotodunk, which was sold to music service iLike (our coverage here).