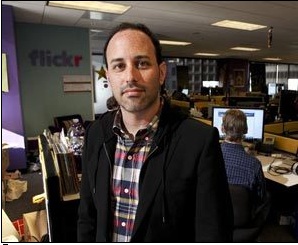 Rothenberg, who was among the first dozen hired at Flickr by original founders Stewart Butterfield and Caterina Fake, led the photo sharing site’s progress over the past five years, which includes the recent design overhaul and various tweaks to make the site more friendly in the face of competition from Facebook and other photo sharing networks.

“While I believe highly in the future of Flickr, my time to be leading the charge has passed. I need to pass on the torch to the next generation of Flickreenos, all of whom have a clear mission, sense of purpose, and the drive and talent to get it done. I know that they are up for the task,” Rothenberg stated on his blog.

The departure, Rothenberg asserted, was a personal decision and not one based on any overall turmoil Yahoo has had internally. Unrest by those inside the Yahoo camp became more public after the company’s change in direction under new CEO Carol Bartz.

More recently, there has been speculation about the future of Flickr given that Yahoo has outlined a list of products that would either be restructured, shut down, or sold off. Among those being sold off was the once shining example of Web 2.0 renaissance, Delicious that hasn’t changed much since it was acquired in 2005 despite rising competitors in the social bookmarking space.

However, Yahoo has definitely given more attention to Flickr than it did to Delicious, and the company claims it will continue to do so despite Rothenberg leaving.

Matthew Rothenberg has made the personal decision to move on to a new endeavor. In the interim, Markus Spiering will be stepping in as head of product management. Flickr continues to have an innovative, energetic and creative leadership team that is dedicated to its community of members. Flickr remains a key priority for Yahoo! and we are fully committed to making it the best photo-sharing experience on the Web.

Rothenberg declined to announce the details of his future plans but did state that it had been decided and would be revealed soon.