It’s still early yet, but two new browser/blog offerings hitting the market appear to offer a lot of promise. They are WordPress.com and Flock. First a description of WordPress, and then how it fits into the intriguing Flock.

1) WordPress.com is being introduced, as we write, at the Blog Business Summit in San Francisco. Matt Mullenweg is the 21-year-old lead developer of WordPress, and gave us a sneak preview of the spiffy new edition yesterday. WordPress.com is the corporate version of the open source blogging software already in circulation, at WordPress.org. (Mullenweg recently secured the rights to the “.com” for the corporate version). We say corporate, but anyone will be able to use it. “The point is to get everyone in the world a blog,” Mullenweg told us. (See update below about how eBay is already listing a WordPress.com account).

Here is why it is significant. It is still being offered for free. The original open source version, WordPress, was already popular, but some users didn’t like that you had to find a hosting service in order to use it. The WordPress.com version can be hosted at WordPress, or on your own corporate server — you choose. So companies can just give users their own blogs. You can custom-make it easily, which is its real strength (you can’t change the underlying core code, though, which will remain embedded in WordPress.org, where open source code will continue to be developed over there). Also, Mullenweg wants to turn WordPress into a real company, so that users have a place to go — an entity to hold accountable…more…

It looks to be a formidable competitor to the leading blogging services Blogger (from Google) and Typepad, offered by Six Apart (which has done well in the corporate market too). Interestingly, even this WordPress version will remain free, regardless of the number of blogs someone uses or the support, so it looks to undercut Typepad. It is unclear what Mullenweg’s long-term business model is. Says Mullenweg: “Everything currently available (including non-metered bandwidth) will be free as long as we’re around. If we add something high cost (like video hosting) we may make that available for an a la carte fee, but if that happens it won’t be for at least another 6 months.”

For the record, the piece in today’s Merc (free registration) about the blogging conference was a bit misleading. The story is ok, but editors slapped on a headline that suggested Mullenweg’s aim is to make money, which wasn’t the point, and was referring to a single reference elewhere in the story. Note that the existing WordPress has been free, and that’s been Mullenweg’s vision thus far.

Mullenweg’s brief demo of the new version impressed us. The original WordPress, the product of developers, was somewhat spartan, and some users disliked the colors. The new version has new colors. More important is the ability to change things on the fly. You can drag and drop things like category boxes, timestamps and so on, from one side of your blog template to the other. (Or if you have an ad column from Google’s AdSense at the bottom of the page, where no one can see it, you can now simply drag it up to the top of the page.) And within the category box, you can shift category headlines, and so on.

It offers the Microsoft Word-style WYSIWYG (What You See Is What You Get) interface, so that non-techies can easily edit posts. It also offers an easier way to tag posts on the fly. If you’re not sure what you should tag a post, a category box pops up, showing you the global list of tags. WordPress.com offers you your own domain name. Unfortunately, in this launch phase, it is still invite only (go here). Also, you can follow Matt’s thoughts on his blog, Photo Matt, and his thoughts specifically on WordPress.com at Matt on WordPress.

Not bad for a guy who thought he was going to be a jazz saxophonist until just a couple of years ago. But he got caught up in working on WordPress, and moved out to San Francisco (Soma, of course) from Houston about nine months ago. Lately, He’s been seeing about 2,600 downloads of the existing WordPress per day, totaling more than half a million. (Photo above, courtesy of Jane Forshort, is of Matt drinking after turning 21.)

So, it gets interesting when we found out WordPress would be the default blog tool baked into the upcoming new browser called Flock. 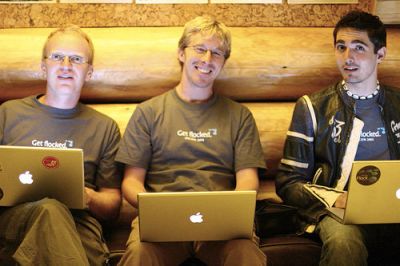 2) Flock. Flock is notable because it is promising to launch a browser that is even more flexible than Firefox. The browser is aimed at making it easy for the Web 2.0 crowd to blog, post photos, etc. There’s something codenamed “breadcrumbs,” or built-in features like Flickr and Del.icio.us.

We met some of the Flock guys recently at an Indian restaurant around the corner from their Palo Alto digs. This different picture here, of the Flockers, is courtesy of Osaka Steve.

The new broswer should be unleashed sometime in September (it is being trial tested by select users). As the team explained it, the original goal was to build a bunch of new products and features for the existing Mozilla. They’d called the company Round Two. But when they bumped into Bessemer’s David Cowan in March, he convinced them to broaden their vision — and, of course, take his money. So Decrem and his team set out to build a web browser especially designed for what they call the “social web.” They changed the name to Flock.

They credit Dave Sifry with the following analogy: The original Web experience, dubbed Web 1.0, is like a library, where a surfer can go places and find things. But the newer Web 2.0 goes beyond that, and includes interaction, a two-way web, where there are on-going events and connections between people, sharing of information, and general talking back to the Web. The trick is “how to re-engineer the client of the Web to maximize that experience,” Decrem says. Flock’s VP of marketing, Geoffrey Arone, said the company is obsessed with streamlining the experience. They’ve got eight employees.

The thinking goes, Firefox can’t react as nimbly because it is serving something like 70 million users and busy poaching Internet Explorer users.

We first saw a mention of Flock here, but here was our first mention of the team, at Round Two.

Flock is led by Bart Decrem, the marketing guy at Mozilla Foundation and present during Firefox’ launch (he is the guy on the left in the photo).

I was blown away! Drag and drop blogging – drag text from a blog post and it automatically creates a cite tag with a link to the original post and the quoted text is indented using a blockquote tag. Drag and drop Flickr photos (I do this painfully every day for Urban Vancouver e.g. check out today’s East 12th and Commercial photo). And Chris teased me with some more future features like having del.icio.us as your bookmarks (goodbye to useless local bookmarks).

Updated, 7/21: Just stumbled across Flock’s web site. Also, here’s a review of by Will Pate of Chris Messina’s presentation of Flock at Bar Camp, which we mentioned earlier here.

Update, 7/23: Lorelle, in comment below, points out that there’s bidding going on for a WordPress.com account on eBay. Our filters rejected the link provided, so here it is. Bid is up to $20.50.