We use our phones for a lot of things these days, but our app choices change year to year. New data from Flurry says that over the last year, our biggest change in use has been to spend more time with shopping and work apps.

Overall, mobile activity increased 76 percent this year from last year, according to Flurry’s data. And while mobile messaging saw over 100 percent growth, the real star was mobile shopping, which grew 174 percent year-over-year on both iOS and Android. 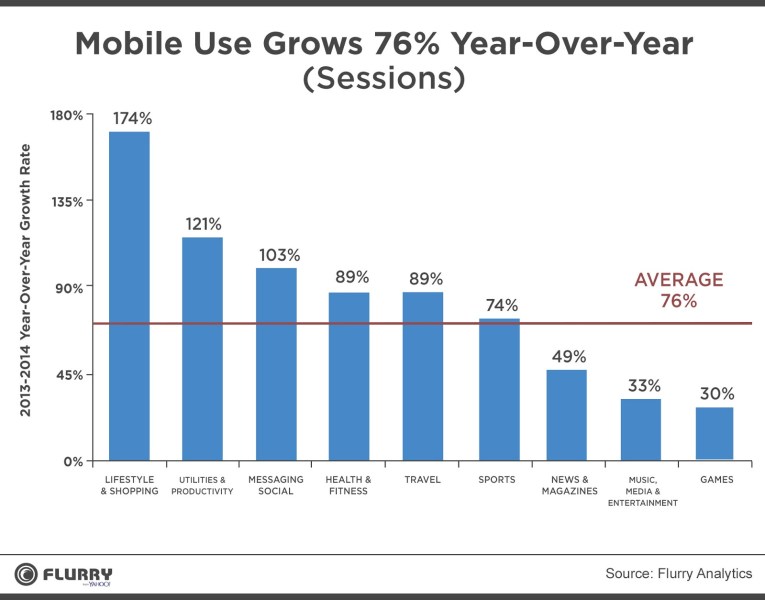 On Android alone, mobile shopping skyrocketed 220 percent from the year before.

The rise of mobile shopping is most notable because online shopping hasn’t taken off quite the way that it was expected too. A U.S. Census Bureau report notes that only 6 percent of U.S. retail sales take place online. But mobile shopping may be able to recapture a spending habit particular to in-person sales.

“One of the reasons that mobile is convenient is because it can capitalize on the impulse sale,” said Flurry CEO Simon Khalaf. He said impulse buys may account for anywhere between 15 and 40 percent of all retail sales in the U.S. The reason mobile can satisfy your urge to buy on the spot is because your phone is everywhere you are. For online shopping, you not only have to be in the mood to buy something, but you also need to have a computer handy.

Still, Khalaf notes, the success of mobile shopping ultimately depends on what retailers do and whether they adopt it.

Besides shopping, people are also working more on their phones. Productivity saw a jump of 121 percent. While some of the bump can be attributed to the ubiquity of mobile devices, Khalaf said the rise of productivity on mobile is more about app maturity and millennials.

He noted that office software is increasingly expanding to cellphones and tablets, and out of convenience we’re using these devices more. Plus certain types of mobile apps, like email and file-sharing services have been around long enough that we just accept them as the norm. Khalaf said an important part of this trend is that kids who were 12 or 13 years old when smartphones started taking off are growing up more inclined to do work on tablets and smartphones. Developments in cellphone screen size and the emergence of the phablet don’t hurt either.

Ultimately, he said, this may be the swan song for the desktop computer: “The end of PCs is coming.”