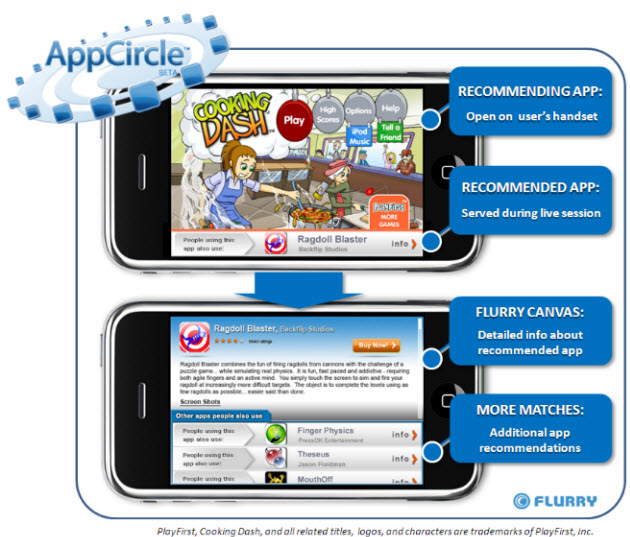 With 100,000 apps in Apple’s AppStore, it has become ridiculously hard to get an app discovered. At any given time, perhaps 100 apps are easy to find on the featured apps or top apps lists. That’s why analytics startup Flurry is launching a new platform, AppCircle, whose aim is to get iPhone and iPod Touch apps noticed.

The platform is a natural extension of the analytics business that has become very popular. With AppCircle, Flurry can offer something valuable to developers. And, with luck, those developers won’t mind sharing revenue with Flurry, given that the platform should help them generate lots more sales.

Peter Farago, vice president of marketing at Flurry, said that it all starts with analytics. Developers can use Flurry’s analytics for free, just by putting some code in their iPhone/iPod Touch apps. Flurry can then get lots of data about what users do, such as how much time they spend with an app, what other apps they use, and how much money they spend on apps.

“Flurry can effectively solve the problem of discovery for thousands of developers,” Farago said.

That data becomes extremely relevant in coming up with a list of recommended apps. Apps that use Flurry’s AppCircle can then make a recommendation to the user about other apps they should buy. The recommendation appears much like a mobile ad: it’s a single line at the bottom of the app which a user can tap. Because the recommendation is based on the users own tastes, it can be much better targeted. All the user has to do is tap on the recommendation, which brings up a description of the app and then another link to tap for purchase.

If users purchase a recommended app, Flurry knows about it. It can thus take its cut of the purchase and the developer keeps the rest. It’s a kind of razors and razor blades strategy, where Flurry gives away its analytics and potentially makes money on the recommendations.

The payment works like this. A user pays the regular AppStore price for a recommended app.  The developer whose app is sold takes 70 percent of the gross sale and Apple keeps 30 percent. Then the developer whose app is sold, shares another 50 cents or 30 percent of the app gross (whichever is higher) with Flurry. Flurry splits that between itself and the host app (or the one that does the recommending).  Later, Apple gives 5 percent to Flurry via Linkshare, a marketing program that rewards companies that generate AppStore purchases. So Flurry’s total winds up being 20 percent of the gross in the end. Flurry doesn’t get anything unless a transaction takes place.

It is not so different from the way that AdMob, which was purchased by Google last week for $750 million, makes money via mobile ads. But Flurry’s technology is interesting because it is based not just on what users purchase, as is the case with Apple’s Genius application. Rather, it’s based on usage of those apps. Farago says that this fact makes the apps a lot more useful.What’s more, ads tend to work best in free apps. In paid apps, users show less patience for ads.

Dozens of developers are trying out the system, Farago said. Five or ten of them may launch by the end of November. The platform has been submitted to Apple and there are no red flags. Flurry has been working on the technology for six months. One of the developers trying it out is PlayFirst. And Farago showed off a game, Digit Defenders, that uses the AppCircle platform.

“We’re pretty excited about it,” Farago said. “We think this can be just like driving word of mouth.”

Besides AdMob, other rivals include Scoreloop, Ngmoco, and Aurora Feint. The latter three focus on games. But Farago noted that other apps such as books are coming on strong. It’s possible for Flurry’s AppCircle to make recommendations that cross product lines, such as recommending a Harry Potter eBook to someone who bought a Harry Potter game on the iPhone. If a publisher wants to block certain apps from being recommended, it can do so.

Overall, the benefits for apps developers could be reaching new users, better return on investment in acquiring new users, affordably priced advertising, a higher ranking in the AppStore, a charge only when a download occurs, and the automatic generation of ad material. The latter is true because Flurry’s descriptions use the available AppStore assets.

If the plan works, Flurry will be on its way to its first meaningful means of monetization. The company was started in 2005 and has raised $5 million to date. It has 12 employees.

[The excitement in this industry is one of the reasons why we’re holding an executive event called DiscoveryBeat on Dec. 8 in San Francisco. The event will explore the secret recipe for getting your social game or mobile phone application “discovered” in an age of increasing noise. Get your early bird ticket by today to get 25 percent off]