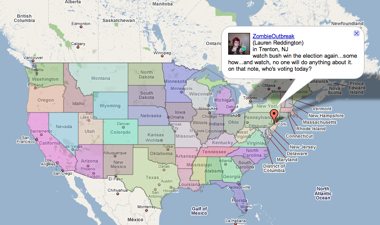 Google is pulling out all of the stops in its coverage of Super Tuesday. As 24 states hold primaries today to help determine the Republican and Demoratic nominees for President of the United States, Google has created a Super Tuesday Map to help users follow what is happening in real time.

By utilizing services such as Twitter and YouTube, Google has created a way to better integrate citizens into election coverage than any television network has ever done. What you have here is a truly interactive way to explore the election process.

This specialized Google map has each of the states broken down into its counties and will feature live election results as they start rolling in later in the day. Google’s partnership with Twitter on this maps will provide live updates from Twitter users about their Super Tuesday experiences from around the country.

Interestingly, although the Google LatLong blog does claim to only offer “Twitter updates from around the country”, the map is clearly picking up data from around the world. These global tweets (Twitter updates) do appear to all be Super Tuesday related however as Google is utilizing the 3rd party application Twittervision to filter the messages it shows.

Google also plans to roll out a layer for this new map later in the day that includes Super Tuesday related YouTube videos. They will also allow for this Super Tuesday map to be embedded on anyone’s site.

As you wait for the polls to begin closing you can read the latest news via Google’s special election news-filtered Google News page or pick up their new Follow the Candidates widget.