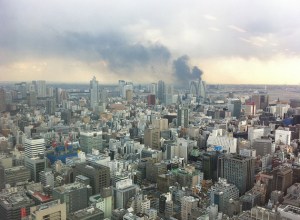 FON, a company that manages a large network of wi-fi hotspots, is opening up its 500,000 some-odd hotspots in Japan to web surfers for free until the country’s state of emergency following a massive earthquake and tsunami comes to an end.

The wi-fi networks will open up for everyone in order to help Japanese residents displaced or affected by the earthquake communicate more effectively. That includes the use of social media sites like Facebook and Twitter, which have become critical during national emergencies as tools for communication — such as when protesters swarmed Egypt, calling for the country’s top leader to resign. Twitter also became one of the most widely used tools for protesters during Iran’s 2009 national election.

Japan was rocked by an 8.9-magnitude earthquake on the Richter scale — which is a logarithmic scale, meaning that an extra 1 point on the scale means the quake is about 32 times more powerful. The earthquake rocked the northeastern portion of the coast and generated a tsunami warning across the country — which also reached portions of the United States, including Hawaii. The quake was the strongest to hit Japan in at least a century and generated a tsunami as high as 33 feet that flooded northern towns. The quake was followed by a 7.1-magnitude aftershock

FON’s humanitarian offering could also prove to be a fantastic way to generate some positive buzz for the hot-spot service. The free wireless should be really helpful for Japanese citizens, seeing as a number of the country’s cloud-based services — where programs and services are run on remote servers — were disrupted following the quake. Residents are posting videos of the quake on the CitizenTube channel on YouTube and using the service to reach out to friends and families across the world. Google Person Finder is also available to help people get information about loved ones.

The Madrid, Spain-based company was founded in 2005 and has more than 3 million wi-fi hotspots globally. FON is backed by Google, Skype, Index Ventures and Sequoia Capital.