About one in eight people have, shall we say, highly explosive digestive symptoms that come from eating the wrong foods. Now an Irish startup, FoodMarble, has created a tracking device and an app that can help you pinpoint the source of your gastronomic distress.

The Aire is now available for preorder at $99 (for now) on FoodMarble’s site, and it will ship in the middle of 2017. The gadget is one more in a long line of devices that are helping us measure and analyze our health with a combination of sensors and smartphone connectivity.

FoodMarble’s Aire is a breathalyzer-like device that you blow into for a few seconds. It captures the presence of gas related to fermented foods — or those that aren’t digesting well in your large intestine — on your breath. Then it gives you a score of 1 to 100, rating your digestive comfort at the moment.

If you take a test every 15 minutes or so, you can track the period of maximum discomfort, and then through a process of elimination you can figure out what makes you feel bad, said Aonghus Shortt, CEO of Dublin-based FoodMarble, in an interview with VentureBeat.

“Some people have symptoms that impact daily life, like irritable bowel syndrome,” said Shortt. “They are intolerant of certain foods, but may not know which ones. We want to make this measurable.” 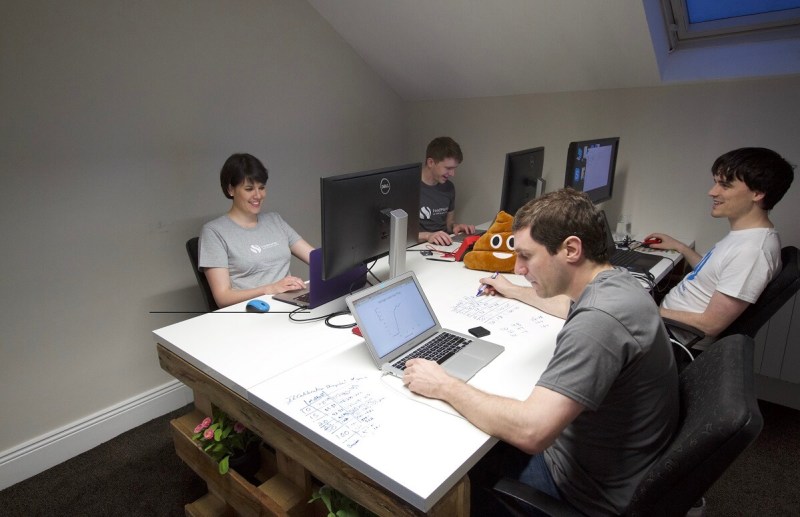 Above: Founders of FoodMarble, maker of the digestive tracker Aire.

Of course, if you eat a big pile of beans and you’re gassy afterward, it’s not hard to figure out what made you flatulent. But James Brief, a gastroenterologist and cofounder of FoodMarble, said that it isn’t usually that easy. Food sensitivities typically include glucose, fructose, lactose, and sorbitol. Brief has to go through lots of appointments with his patients to figure out what might have made them sick, as many as a couple of days after they ate something. The usual tests, such as blood tests or a colonoscopy, don’t catch digestive problems. Instead, the diagnosis involves detailed food studies with dietitians.

What normally happens is food passes from your stomach to your lower intestine, where it is absorbed into the body. If it passes on to the large intestine, it starts to ferment with the bacteria and produce gas, resulting in flatulence, bloating, pain, or diarrhea, Brief said. Some of the gas particles pass into your lungs, and the Aire digestive tracker can detect the presence of those particles.

Aire is available on FoodMarble.com to preorder for $99, about $50 off the expected retail price. 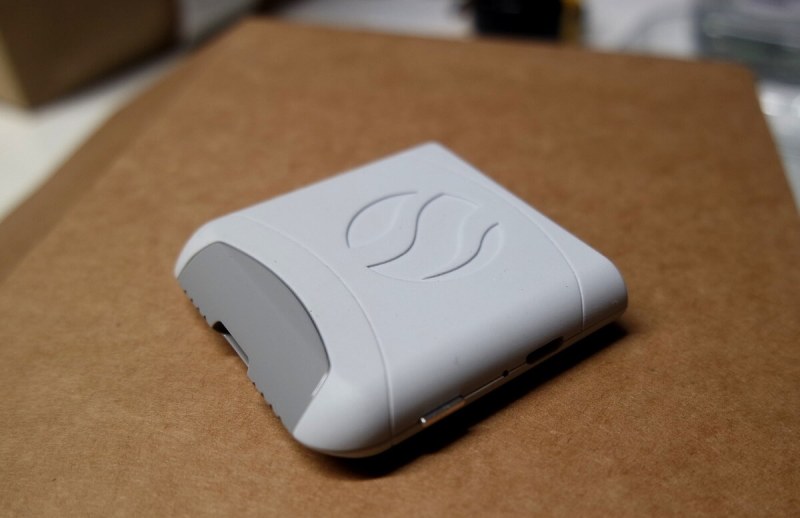 Above: FoodMarble’s Aire detects food gas in your lungs.

When you breathe into the Aire device, it detects whether you have eaten something that is compatible with your body or not. When I breathed into it, I got a base score of 36, which can be used as a baseline for the future. If your score is near 100, something is wrong. You can also detect other signs of stress, and your sleep quality, and, in the future, correlate that to the results.

With the Aire device, you get samples of foods with potential triggers (dubbed FODMAPs) that include particular solids such as lactose. Then you can take a test every 15 minutes with the Aire to track how it moves through your digestive system. At the end of the test, you can figure out whether you’re reactive to that sample or not.

Lisa Ruttledge, chief operating officer, said the company can check a lot of typical triggers, such as wheat, fruits, dairy, and many other types of foods. She showed one example where someone ate something that caused a reaction, prompting a high level of gas about 80 minutes after consumption. But each person’s reaction is different.

Brief said the alternative to the test is something like $500 per doctor visit, where you have to take a test and have it analyzed. And it usually takes multiple tests over time to do a full analysis.

“The breakthrough that let us do this comes from the availability of much better sensors,” Shortt said.

Shortt has been working on the company for a few years. He started out at a hardware accelerator in China, and that helped the company figure out what kind of device it would build. The device has a couple of gas sensors, as well as temperature and humidity sensors. These sensors are different from those used in hospital-grade gas chromatography machines.

The Breathometer Mint uses a similar kind of sensing, but that device tries to diagnose dental problems, such as chronic bad breath. The company plans to raise money in the near future.