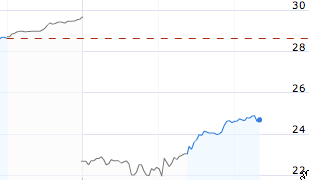 As was universally expected, Yahoo’s stock price took a huge hit when trading resumed on Monday following Microsoft pulling its bid for the company over the weekend. The stock, which had ended the after-hours session on Friday (when it was meeting with Microsoft and a deal seemed possible) at $29.70-a-share, opened in pre-session trading today at $22.67.

The stock had sunk as low as $21.95, a drop of just over 26 percent from its after-hours high, and near its $19 level when Microsoft made its bid in the beginning of February. Worse, this represents a decrease of over 33 percent from Microsoft’s final offer of $33-per-share.

But now the stock is rallying.

Since opening the trading session around $23-a-share, the stock has steadily climbed back up and now finds itself in the upper $24-a-share range. Why? Well, the initial sell-off was no doubt thanks to many who assumed a Microsoft takeover would help the company and bought the stock for short-term gain, Now a new group of investors may be buying up the stock assuming the companies will go back to the table at some point. Some may also like the prospects of Yahoo continuing its search advertising deal with Google.

It’s certainly not a pretty day for Yahoo, but the company is still significantly better off than where it was when Microsoft made its initial bid in February. This, of course, could change, depending on how the company actually performs without the Microsoft offer to fall back on.