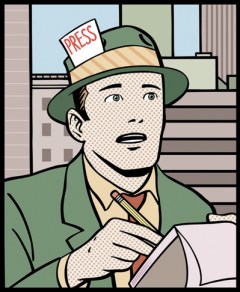 Independent journalism site True/Slant, founded a year ago by former AOL news executive Lewis DVorkin, has been acquired by relatively deep-pocketed publisher Forbes Media, DVorkin announced in a post this morning. Terms of the deal have not become available yet, but Forbes is expected to use True/Slant as a “blog farm” to grow stories that Forbes can redistribute.

When DVorkin enthusiastically launched True/Slant in April 2009, he envisioned a site that would serve as a publication to which individual journalists — specifically, the thousands of newspaper reporters and columnists being laid off everywhere — could contribute and be paid.

On that premise, Forbes Media, News Corp., and others invested in True/Slant. But last month, it emerged that DVorkin was consulting at Forbes, with the editors of Forbes and Forbes.com effectively reporting to him, according to Peter Kafka at MediaMemo.

Forbes is partially owned by private-equity shop Elevation Partners, which bought a minority stake in the media company in 2006 for an estimated $250 million to $300 million.

Both Silicon Alley Insider and I dinged True/Slant as “boring.” It was. DVorkin didn’t help his cause with the weird, non-Internet-friendly “True/Slant” name, his use of inscrutable journalist-jargon section titles such as The Copy Box, the site’s snoozy headlines like “Detroit: Still can’t catch a break,” and as much as I hate to say it, dull articles. Nor did DVorkin try to jumpstart the site, as Arianna Huffington did her Huffington Post, by bringing in celebrity contributors to draw readers from elsewhere.

True/Slant, like the blogosphere at large, suffered from the hope that talented individuals given the right blogging tools would become Internet idols. Instead, the site has been good for quotidian stories that read like page B14 of a hometown newspaper. Well, almost: Many stories, including DVorkin’s announcement of the Forbes deal, lack the helpful sentence or two at the start that explain the context of the news being talked about, for readers new to the story. Instead of unleashing writers’ craziness, blogging seems to nurture their laziness.

What True/Slant lacked wasn’t a star writer. It needed DVorkin to drag the site’s contributors the last few yards from competence to relevance. The good news is it looks like he’ll be doing that for Forbes instead.