Chariot currently operates nearly 100 shuttles along 28 routes in the San Francisco Bay Area and will expand to five additional cities in the next 18 months.

Ford also launched a first of its kind public-private partnership between Ford, other companies, and Bay Area cities. Ford wants to reduce congestion in cities, starting with the San Francisco Bay Area, to address what Fields calls a “transportation crisis.” Data from the shuttle service and bike-sharing program will inform commuters who use the Ford GoPass platform. Ford Smart Mobility and the newly created Ford City Solutions teams will look to expand shuttle and bike-sharing services to other cities in the future. 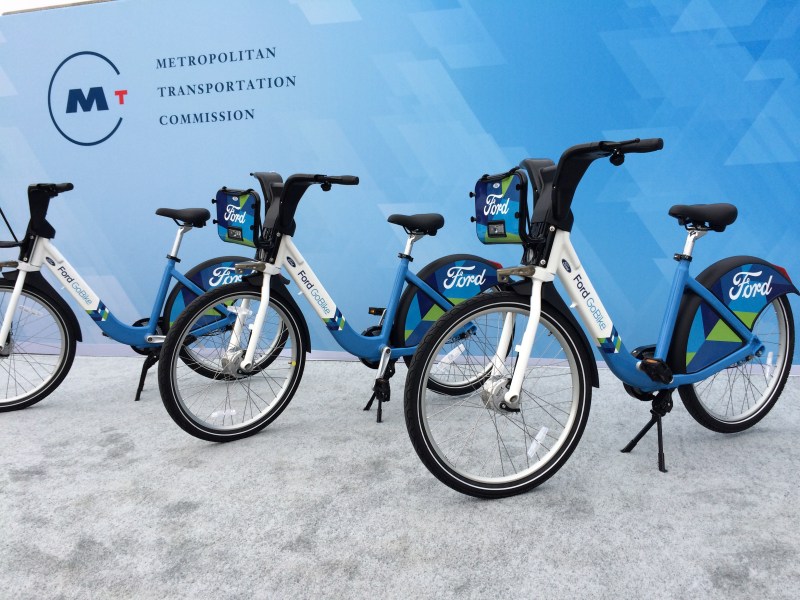 Above: FordGoBikes by Mobility on stage at a Ford press conference held in Civic Center Plaza in San Francisco Sept. 9, 2016.

A bike-sharing program led by Motivate (maker of the Citi bike program in New York) was also announced Friday. The FordGoBike program will bring 7,000 bikes in the coming years in areas across the San Francisco Bay Area including the East Bay, according to Mayor Lee. San Francisco currently has fewer than 1,000 commuter bikes, Lee said. Oakland and Berkeley will begin to receive bikes next spring.

“So, if you think about it, you’ve heard the CEO of a major automotive company, a global automotive company talk about bicycles and shuttles,” Fields said. “It’s a little different than you’re used to, but that’s because I believe we’re in the midst of a transformational moment in the history of transportation not only here in San Francisco, not only here in the United States, but around the globe.”

The news Friday comes as Uber begins to allow users in Pittsburgh to hail self-driving taxis. Self-driving taxis hit the streets of Singapore last month. On August 16, Ford announced plans to manufacture fully autonomous vehicles by 2021 and double its presence in Silicon Valley from 130 to 260 employees.

General Motors made its own ridesharing acquisition in January when it acquired the remnants of the fleet of Sidecar, a startup focused on ridesharing and delivery services. The move came a week after GM invested $500 million in Lyft. Then in March the company purchased Cruise Automation for more than $1 billion.

Companies in the mobility and transportation space like Uber, Lyft, Ford, and GM have been in the public-private partnership business for some time now.

Earlier this year, Uber and Lyft were working to establish partnerships with transportation agencies in cities like Boston and Washington D.C. to offer paratransit services that public transit agencies are required to provide by federal law. Research by Brookings said the move could save public transit departments billions of dollars. Uber and Lyft have also sought partnerships with transportation authorities in cities like Los Angeles and Dallas to share data.