An investment in Velodyne LiDAR for autonomous vehicle sensors and the acquisition of Israel-based machine learning company SAIPS were also announced.

The cars will be made specifically for ridehailing or ridesharing, Fields said, and will potentially have more impact than Ford’s assembly line.

“So today we’re no longer just an auto company, we’re also a mobility company,” he said. “Starting in 2021 if you want to get around the city without the hassle of driving or parking, Ford’s new autonomous vehicle will be there for you in 2021.”

The mass-produced cars will be SAE Level 4 vehicles, or fully autonomous cars.

Ford is going for SAE Level 4 because “it and only it extends mobility to millions of people who aren’t currently served,” said Ford CTO Raj Nair.

A partnership with Nirenberg Neuroscience, a computer vision company led by Dr. Sheila Nirenberg working to restore sight to patients, was also announced.

“Combined with the machine learning algorithms, Dr. Nirenberg’s technology could ultimately help us scale up the autonomous vehicle to operate in areas where 3D maps may not be available,” Nair said.

The car company shared plans Tuesday to double its footprint in Silicon Valley by the end of 2017, opening two new office buildings near its innovation center. The Ford Research and Innovation Center opened in January 2015 and currently has 130 employees, a Ford spokesperson said.

In April, Ford and Google teamed up to create a coalition that encourages regulation in favor of fully autonomous cars. 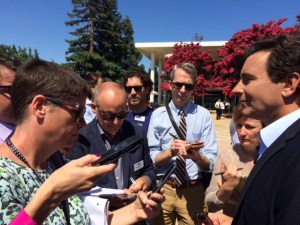 Above: Ford CEO and President Mark Fields speaks with reporters after a press conference held to announce plans to produce autonomous vehicles by 2021. Credit: Khari Johnson

Google, GM, Audi, Honda, Tesla, and other companies are engaged in autonomous driving efforts. Apple is also reported to be working on a self-driving car.

Fields gave little insight into what he means by mass production, stating that in 2021 that will mean more than a couple hundred and less than the 18 million cars Ford sells today.

Fields said he is not concerned with Lyft and Uber exploring the creation of their own driverless fleets because it’s a rapidly changing space. About the idea of a Ford brand ridesharing program, Fields said repeatedly, “all options are on the table”:

“Let’s face it: When we do come out with a fully autonomous vehicle, we’ve made a lot of progress on the cost but it still will be a relatively expensive vehicle, and that’s why we think commercial applications in a ridehailing or ridesharing business makes a lot of sense because the biggest cost right now is the driver,” Fields said. “And if you take that out of the equation, it brings down the cost, brings down the cost to the consumer, they use it more, and as we’ve said, we may do things on our own, we may do things with others, so everything is on the table going forward.”