StackSocial, a 22-person L.A.-based ecommerce startup funded by luminaries such as Tim Draper and 500 Startups, has never touched a penny of its $850,000 seed round. Instead, the ‘native commerce’ pioneer is tripling revenue annually, hitting a “8-figure annual run rate,” and helping some tech blogs earn over a million dollars a year by selling stuff.

Which raises the question: What on earth is “native commerce?”

“For us, native commerce means organic commerce, ensuring that there is relevancy to what the bloggers or publishers are writing about, and what products appear on their site,” CEO Josh Payne told me yesterday.

In other words, it’s stuff that has a natural affinity to the audience of a particular site. It’s integrated into the flow of content on the site, and it’s written about by what looks like an authors on that site, while of course being labeled as “sponsored.” A typical example is a recent StackSocial deal on the gadget blog Gizmodo: 20 percent off an iLoud premium bluetooth speaker: 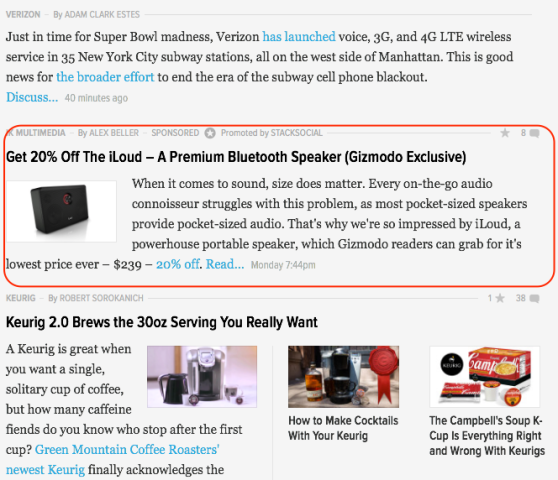 “”The real key is the relevancy — none of our publishers put stuff on their site that isn’t relevant or good news to their audience,” Payne says. “We go to publishers and say here’s a cool product and here’s an exclusive hook or angle … and they can go to their readers and say here’s 10% off or 50% off, just for you.”

Usually stories go straight “in the river” of news, as well as promoted by the site’s social media outposts on Twitter or Facebook.

The model works well for sites with highly-engaged audiences, StackSocial says, and not as well for SEO-driven sites such as PriceGrabber. The deals are unique, sometimes negotiated directly with founders of Kickstarter or Indiegogo crowdfunding projects, and they are tailored to the site’s audience. For example, TUAW (The Unofficial Apple Weblog) runs Mac and Apple-related deals. Lifehacker, another StackSocial client, might run deals on productivity or wellness tools, as well as the odd gadget. 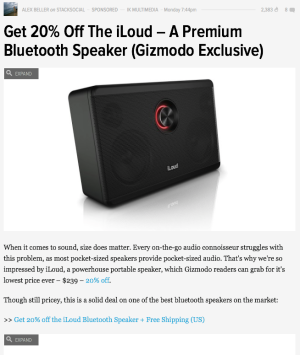 Above: Selling the iLoud on Gizmodo

Selling stuff online is attractive to sites that are struggling to generate cash flow through traditional advertising deals, which is getting harder and harder as the mountain of free content available on the web continues to grow.

“Some of our top publishers are generating seven figures in annual sales,” Payne told me. “We’ve been really proud.”

Most clients that I checked run perhaps one StackSocial product or deal a day, and they’re clearly labeled as sponsored. Clearly, there’s ethical minefields here when news organizations start selling things, but from what I’ve seen, participating sites have been above-board, open, and ethical in their promotions.

The results are hard to argue with, from Payne’s point of view:

30 publishers are now using StackSocial’s integrated platform, in which content and sales are thoroughly mixed, and hundreds of others are using the service’s widgets to sell in the sidebars.

Results like these have made StackSocial an attractive target for venture capitalists looking to invest in proven, growing companies, but Payne isn’t interested right now, saying he’s had the chance to raise “a lot more money” but turned it down to focus instead on growing the business.

Given that StackSocial is profitable, that was an easier choice than it could have been.