Three decades ago, tiny Estonia, a nation with a population of just over one million, was a member of the dying Soviet Union and faced an uncertain future; today it’s one of the most technologically advanced nations in the world. This is how it got there, and what it means for you.

What’s the most innovative place on earth? Maybe Silicon Valley leaps to mind. Seoul or Tokyo, perhaps? Chances are that Tallinn, capital city of Estonia, wasn’t top of your list. However, several groundbreaking technologies have sprung from this little-known city on the northeastern edge of Europe. 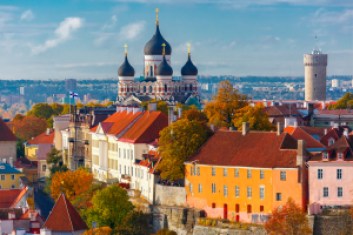 Sandwiched between the icy Baltic sea and the vast Russian landmass to the east, Tallinn is a picturesque city, spattered with medieval churches and cobbled streets. Despite appearances, however, it is a powder keg of innovation and digital creativity. What does that digital dynamism look like? It has high speed internet that covers 88 percent of the country; free high speed WiFi  is available in nearly all public spaces (since 2002); and its e-voting system has been in place for over a decade.

Then there’s its signature digital ID card and its digital e-residency program. The former enables citizens to view their health records online and log their taxes in fewer clicks than it takes you to sign on to your online bank; the latter makes it possible to set up a business in Estonia without ever having set foot in the country.

Many of these developments can be attributed to the progress it made after investing hard and smart in technology after the Soviet era. In essence, Estonia took a bet that while its manufacturing power could never compete with larger nations, it could ride the wave of early digital innovation and pull ahead of the pack that way.

Intriguingly, Tallinn has also been the birthplace to global businesses that have made a big impact on the world — perhaps none more iconically than Skype. Fifteen years later, it’s easy to forget just how revolutionary a product Skype was when it came out. It transformed phone calls, slashed international calling costs, and made VoIP an everyday technology, all in just a few short years in the early 2000s.

Since then Tallinn has become a hub for startups and an engine for innovation across Europe. In fact, Skype’s first employee, Taavet Hinrikus, went on to found TransferWise, an online service for transferring money internationally more cheaply compared to what a bank or PayPal usually charge.

Hinrikus, who was working in London for Skype, explains the problem that led him to start TransferWise: “I spent my workdays at Skype creating a more connected world. We were shrinking the distances between people, making it easier to connect across countries. Then I’d go to my bank to transfer my euros to pounds and it was like going back in time 50 years: Expensive, inconvenient, and painfully slow. It was a nightmare.”

What was the problem, exactly? He discovered that his bank was taking a big chunk of money in the bad exchange rate it gave him, sometimes 3-5 percent, on top of the fees it charged. The same is typically true of PayPal and brokers.

Hinrikus teamed up with his friend fellow Estonian expat, Kristo Kaarmann, to build TransferWise. They launched it in in London seven years ago and have experienced rapid growth. Today, the company is the preferred way to send money internationally for over 3 million customers — including a healthy number of business users. It has 1,000 employees in its nine offices — including four in Europe, three in Asia and Australia, and two in the U.S., with its Americas HQ in New York.

The company typically charges between 0.35 – 1.5 percent, depending on where you’re sending and the amount. Crucially, it always uses the mid-market rate, which means it can offer significantly cheaper prices than a bank. They calculate they save people over $2m a day in bank fees.

Now they’re targeting further growth through a raft of new products, including improved business offerings (such as an API and a mass payments tool) and their new borderless account. Kaarmann explains:

“To strengthen our product, we’ve created the borderless account. It’s an account that’s not limited to one country, so your money is with you no matter where you are in the world. Imagine paying that freelancer in Australia or supplier in India without having to worry about currency conversion.”

The two founders’ belief in building a tech-smart alternative to the slow-paced incumbents seems to resonate with the vision their homeland Estonia set out after independence. In fact, in many ways for Estonia, it’s just beginning. The country laid out a roadmap to digital innovation way back in the 90s. Now they’re reaping the rewards and showing the way for other countries — and reaching consumers around the world, many of whom may be hearing a lot more about Estonia in the coming years.