San Francisco-based Prana said its new wearable, which combines breath and posture tracking, can offer a unique look into your health and well-being.

The small round device clips into the inside of the user’s waistband. It uses a 3-axis accelerometer and a fancy set of fancy algorithms (which took two years to develop) to measure the body’s breathing patterns. It can also tell if you’re slouching.

You can use the information presented by the device’s app (Android and iOS) to train yourself to breathe properly and use better posture. Just doing this can yield a variety of health benefits like lower stress levels and no back pain, Prana said.

The device has two modes — passive and active. In the passive mode, it monitors your breathing patterns throughout the day. If it detects irregularities or shallow breathing, for example, the app might send you a text alert inviting you to jump into a three-minute training session. That training session happens in the active mode, said Prana CEO Andre Persidsky, who is an engineer, computer book author, and patented inventor.

The company said the intelligence built into the device is based on recent medical studies and ancient Yoga traditions. “It’s been known for thousands of years that good posture facilitates good breathing, so it made sense to us to track both,” said Prana’s chief science officer Dr. Paul Abramson, M.D. “We breathe differently in slumped versus upright postures, with significant improvements in forced expiratory volume while upright.”

The device can, for instance, distinguish between chest and belly breathing. It can detect breathing changes and inhalation volumes. Recent science says people feel better when they breathe from the abdomen. 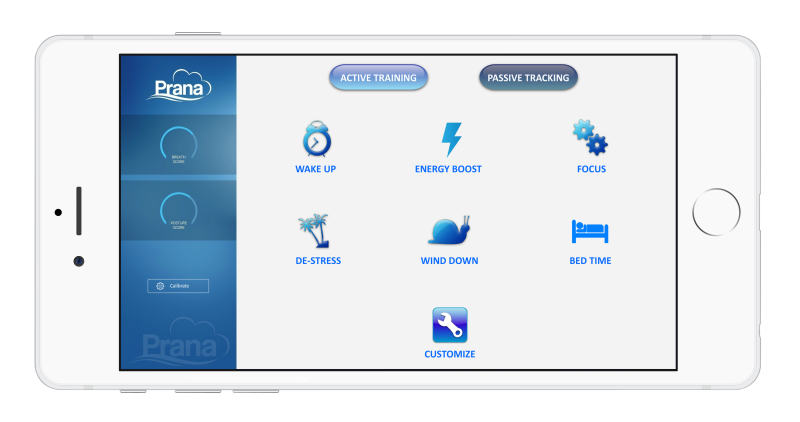 The software in the app offers a library of breathing exercises and techniques from traditions from all around the world, including Yoga Pranayama, Tai Chi, and Buteyko, intuitively organized by time of day or intended effect, such as Wake Up or De-Stress.

The Prana device, which runs on a lithium ion battery whose charge lasts up to seven days, will begin shipping in January 2015 at a retail price of $150.

VentureBeat will have the review. Stay tuned.