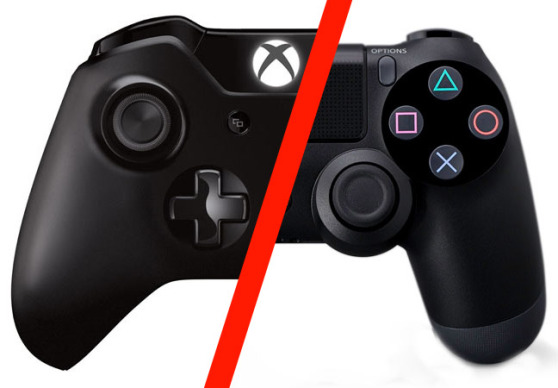 Internet forums are full of discussions about the Xbox One versus the PlayStation 4 in the wake of announcements. But the high-end gamer PC is already running circles around those machines, six months before they hit the market.

In the past, the consoles leapt ahead of the PC, if only for a short time. But console technology is frozen in time. With constant refreshes in technology coming every six months, the PC can absorb the latest processors and graphics cards to leapfrog the consoles. On top of that PC threat, however, is the rapid advances in mobile gaming that could siphon off players from the consoles.

“With so much of today focused on mobile, free to play, and casual gaming on smartphones and tablets, would anyone even buy a next-generation console?” wrote Anand Lal Shimpi, founder of tech news site Anandtech.

Consoles today are engineering marvels, with more than 5 billion transistors — the on-off switches of digital computers — in the Xbox One. But they take so long to design that engineers have to lock their specifications in place a couple of years in advance. And so, by default, the Darwinian PC can evolve faster than a game machine.

Xbox One vs. PlayStation 4

The Xbox One has an eight-core AMD central processing unit (CPU) based on the 64-bit Jaguar design. It has eight gigabytes of DDR3 random access memory, a 500-gigabyte hard drive, HDMI in/out, USB 3.0, gigabit ethernet, and the Kinect motion-sensing and voice recognition system. The AMD processor is believed to run at 1.6 gigahertz, and it is coupled with an on-board graphics processing unit (GPU).

The PlayStation 4 also has an eight-core Jaguar AMD APU, with a GPU that is about the same performance as the AMD Radeon 7880 GPU. It has eight gigabytes of GDDR5 random access memory. That graphics memory gives it 176 gigabytes per second bandwidth for the CPU and GPU. Shimpi said that the value of that memory bandwidth is about the same as what you would get in terms of bandwidth from a $300 GPU for the PC. But the graphics memory is expensive, Shimpi said, and Sony is now dependent on it for the life of the console.

Sony hasn’t said how much hard drive storage it will have. Both have Blu-ray disk drives for loading games and playing movies. Some reports estimate that the Xbox One will use 3 gigabytes of its main memory to run its three operating systems, while Sony will only use 1 gigabyte for that purpose.

Sebastian Anthony at ExtremeTech wrote, ” In short, while there are small hardware differences between the consoles, they will ultimately have very similar performance characteristics. The PS4, with its one, big block of fast RAM, and bigger GPU, probably has the edge.”

But it’s less clear comparing the capabilities of Sony’s PlayStation Eye and the Xbox One’s new version of Kinect. It appears that Kinect has the upper hand, ExtremeTech said, but more details will emerge later. Kinect has its own dedicated chips for handling voice recognition and a 1080p high-definition camera, along with an active infrared camera. So no matter where you are in a room, Kinect knows who you are and what you’re doing.

Kevin Krewell, senior analyst at The Linley Group, said that the Jaguar cores are “modest performing CPU cores.” But there are some details missing such as exact clock speeds that would make the comparison easier. (He notes that official clock speeds have not been released yet for the consoles).

The PS 4’s GPU has 18 compute units, while the Xbox One’s GPU has 12 compute units. That would give the PS 4 an advantage even if the Xbox One GPU had a higher clock speed. AMD’s top-of-the-line graphics chip for the PC, the AMD Radeon HD 7970, has 32 compute units. Krewell said that a quad-core Intel Core i7 processor with eight threads (or separate programs) should outperform the eight-core Jaguar processors. (That’s akin to how one kind of car engine can perform better than another kind of car engine with the same number of pistons).

“From the limited specs we have today, I believe the PS 4 will outperform the Xbox One on graphics and should scale better on 4K displays,” Krewell said.

The 4K displays will be used in televisions and monitors that have four times the number of pixels as today’s high-definition TVs. But a consumer would have to have a new 4K TV, which today costs thousands of dollars, to exploit that advantage.

With AMD technology in all three consoles and in x86-based PCs as well, it has never been easier to compare the machines. But it’s also clear that Sony and Microsoft are going to have a hard time differentiating themselves from each other. For developers, that part of the story is good. However, Shimpi points out that the bad news it the memory subsystems are wildly different and could require different programming techniques. Microsoft’s 32-megabyte cache, for instance, has to be properly managed via programming. 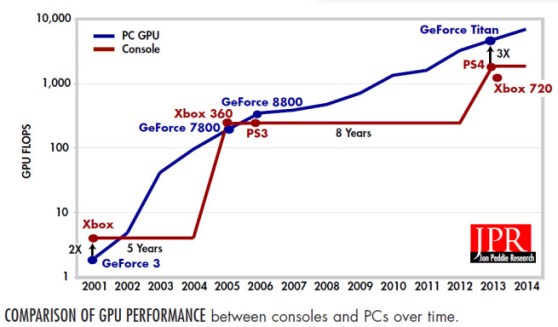 The PC wins, but at what price?

Microsoft’s Xbox One semi-custom processor is built with a 28-nanometer manufacturing process. But Intel is already moving on to its Tri-Gate 22-nanometer process with its microarchitecture code-named Haswell. Intel’s fourth-generation Core processors, based on Haswell designs, are shipping in PCs in June and July. Since Haswell uses a more advanced manufacturing process, it has better performance, lower cost, and better power efficiency than chips made with a less advanced manufacturing process (in this case, 22 nanometers is more advanced than 28 nanometers). Intel notes that the graphics performance of its processors is twice that of last year’s model, and it is more than 75 times better than models introduced in 2006.

When it comes to the PC, the eight-core Jaguar appears to get about half the performance of a current generation Intel Core i7, ExtremeTech said. And the AMD Radeon 7790 is currently used in a $150 graphics card.

“In short, then, today’s PCs will stomp all over the Xbox One (and PS4) in terms of raw computation power,” ExtremeTech said.

Historically, the battle has been one-sided. Consoles gain an edge when new versions come out, but that was eight years ago. The Xbox 360 was ahead of the Nvidia PC graphics chip, the GeForce 7800, in 2005. But by 2006, Nvidia’s GeForce 8800 chip could outperform the graphics in both the Xbox 360 and the PlayStation 3, according to Jon Peddie Research, a longtime visual market researcher headed by analyst Jon Peddie.

“They were ahead for about six months, but we destroyed them for the last seven years,” said Frank Azor, general manager of Dell’s Alienware division, a maker of gaming PCs.

The Xbox 360 had about 300 gigaflops of floating point performance, on a theoretical level. The PS 3 was about 400 gigaflops. The Xbox One and PS 4 are expected to be about six times more powerful on graphics. The Xbox One can do 1.23 teraflops, while the PS 4 can do about 1.84 teraflops. The systems have about 16 times the amount of main memory as the Xbox 360.

What will the future hold?

Microsoft had an intriguing argument where it said that “cloud processing” techniques could lead to an improvement in the Xbox One’s performance over time. That’s because the Xbox One is architected so it can borrow processing power from a web-connected data center for tasks that don’t require an immediate response. If that is true, then Microsoft could improve the hardware performance of the Xbox One over time, without changing the actual hardware, said Boyd Multerer, one of the operating system experts at Microsoft.

Sony can also apply that concept to its machines, as it purchased Gaikai, a cloud gaming startup with similar technology. Nvidia also has a cloud gaming strategy in the works with its Grid technology. The easy bet is that the PC will race ahead of the console technology and do so very quickly in this generation.

You might expect Intel, Nvidia, and Advanced Micro Devices to point this out with glee, as the PC is under heavy attack not only from the consoles but from tablets and smartphones. On the other hand, all of these major firms are also strong partners of Microsoft’s and Sony’s. They don’t want to tout the PC too much, or they’ll anger those partners.

Shimpi concludes that Microsoft’s hardware strategy has focused on spreading the applications out beyond gaming (that’s why it has three operating systems, so it can switch between applications quickly), while Sony is very focused on gaming alone.

“If the market for high-end game consoles has already hit its peak, then Microsoft’s approach is likely the right one from a business standpoint,” Shimpi said. “If the market for dedicated high-end game consoles hasn’t peaked however, Microsoft will have to rely even more on the Kinect experience, TV integration, and its exclusive franchises to compete.”

We can’t avoid the irony of the PC’s triumph, which may be a Pyrrhic victory in the end. It has the top performance, but the question is whether it will matter. In a time when PC sales are declining as tablet and smartphone sales rise, many users will choose to the latter platforms for gaming. Tablets and smartphones also improve every six months or so, and the gaming performance on those devices may be approaching “good enough” for many players.