It has been a tumultuous week for Huawei, to put it mildly.

Last Thursday, the U.S. added the Chinese tech titan to a trade blacklist as part of a growing effort to “secure the information and communications technology and services supply chain,” as President Trump’s Executive Order put it. While this naturally prevents any U.S. hardware company from selling components — such as chips that may be used in 5G networking equipment — to Huawei, the world soon realized the ban also applies to software.

Google revealed that to comply with the trade restrictions, it would have to stop providing Huawei with support for Android and Google’s services. This will have some impact on existing Huawei devices, but the real effect will be felt on future Huawei devices, as they won’t be able to offer the Google Play app store or any of the Google services people have come to rely on, such as Google Maps, YouTube, and Gmail.

What has largely been overlooked is the long-term impact this will have on Google. The U.S. government’s intention was to strike a blow at “foreign adversaries,” not to hit Google’s Android revenue. But the move could (and probably will) do just that, particularly with Android already facing growing resistance across the technological and political landscape. 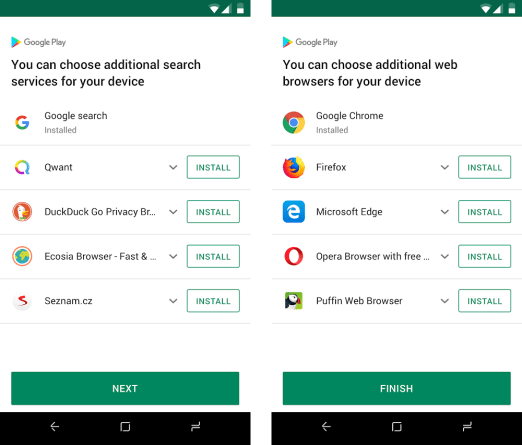 Last year, EU antitrust regulators hit Google with a $5 billion fine for the way it reportedly forced manufacturers to preinstall certain Google apps on Android devices. This led the Alphabet subsidiary to completely rework its licensing model for Android in Europe, instead charging device makers a fee to preinstall its apps — including YouTube, Google Maps, and Gmail — while offering them Google Play, Chrome, and Search under separate licenses. Earlier this year, Google also started suggesting browser and search engine alternatives for Android users in Europe.

Android remains intact for now, but such measures set the groundwork for what has been a gradual unbundling of Android in Europe. Russia launched (and won) a similar case against Google’s Android monopoly a few years before, paving the way for internet giant Yandex to launch a smartphone that put its own services front and center.

Elsewhere, Google has tried to push Android into other verticals, with varying degrees of success. 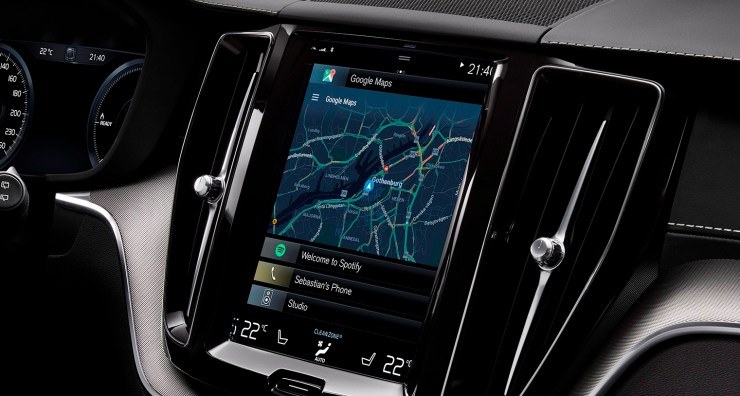 Above: Android in a Volvo

Google has made no secret of its desire to infiltrate the automotive realm. Back in 2014, it introduced the world to Android Auto, which is essentially a mobile app that mirrors features from an Android device on a car’s in-dash entertainment display. A number of carmakers have signed on to support Android Auto, but support is still patchy at best — and there is a reason Google opened up Android Auto so that it works straight from a mobile phone screen.

The initiative was launched in partnership with Volvo and Audi, and we can likely expect the first Android Automotive vehicle — Volvo’s Polestar 2 — to hit the roads in 2020. However, back in November Volvo signed an extended deal with Ericsson, which will provide its connected vehicle cloud platform for Volvo’s in-car digital services globally. It’s not entirely clear what impact this has on Android Automotive, but it does hint at Volvo’s reluctance to hand all its data over to Google.

“Ericsson is providing a highly scalable and global platform for connected services to Volvo Cars,” said Åsa Tamsons, Ericsson’s head of business area technologies, at the time. “By removing complexity in areas such as data legislation and storage management and improving services latency, our platform enhances the overall user experience of Volvo Cars’ connected services.”

Google also signed up the Renault-Nissan-Mitsubishi Alliance for Android Automotive, but a few months back the alliance revealed it had signed a deal with Microsoft’s Azure to power its vehicles’ various services in the cloud. This suggests the alliance is also disinclined to give Google access to all its data, though naturally it made no mention of such concerns.

“Through our collaboration with Microsoft, we are introducing the most powerful and far-reaching connected vehicle platform,” said Kal Mos, global VP of Alliance connected vehicles at Renault-Nissan-Mitsubishi. “Leveraging the size and scale of the Alliance, we have built an intelligent cloud platform that sets the pace for our industry.”

So while carmakers have shown some willingness to embrace Android, Google has not met the resounding welcome it may have hoped for. There may be a number of reasons carmakers are hesitant to hand over the keys to their infotainment systems, but chief among them could be a reluctance to cede control of monetizable data and services to Google.

This resistance has popped up elsewhere in the automotive sphere, with companies pushing to ensure they retain full control over their in-car services.

The likes of Ford and Toyota joined forces a couple of years back to launch the SmartDeviceLink (SDL) Consortium, which supports open source software deployment for cars. And in 2015 a consortium of German car giants bought Nokia’s mapping business for $3 billion, which gave them direct control over their navigation and mapping smarts and one more way to fend off Google Maps’ push into cars.

Wearables, TVs, and tablets paint a similar picture. Samsung started off using Android on its smartwatches but switched to its own Linux-based Tizen OS five years ago — a move that certainly did nothing to help Android Wear’s chances of survival. Despite subsequent rumors that Samsung would perhaps switch back to Google’s Android-based software, now called Wear OS, it has steadfastly stuck with Tizen. Similarly, Samsung has never embraced Android TV, instead using its own Samsung Smart TV platform before switching entirely to Tizen a few years ago. As an aside, LG has sought its own smart TV path in the form of WebOS, which it acquired in 2013.

But rival smartphone companies face considerable challenges as they try to forge a path outside of Google’s Android.

Huawei has made up ground against Samsung, but the Korean company is still the biggest smartphone maker in terms of shipments — 23.1% market share as of Q1 2019, compared to 19% for Huawei. It’s fair to say that Samsung is a big deal for Google’s Android, but it has been clear for a while that Samsung would love to drop Android entirely. The company has tried to push Tizen out into the mobile realm, but thus far it has made it onto just a handful of devices — including the 4G Z2 in 2016, and the Z4 a year later, which was Samsung’s last Tizen phone.

Of course, the problem with switching its phones to Tizen is that Samsung loses the full app inventory Android offers. The company has tried to lure developers on board, including offering cash prizes via the Tizen Mobile App Incentive Program, but that effort has never quite taken off. Android, and all the Google goodness that comes with it, is just too sticky.

Similar to Samsung, Amazon has attempted to go it alone in the mobile phone realm. Back in 2014, it launched its Fire Phone as it sought to build on its burgeoning Fire tablet lineup. Amazon’s Fire devices are based on Android, but they use a “forked” version that sidesteps Google Play Services to provide a direct artery into Amazon’s ecosystem. 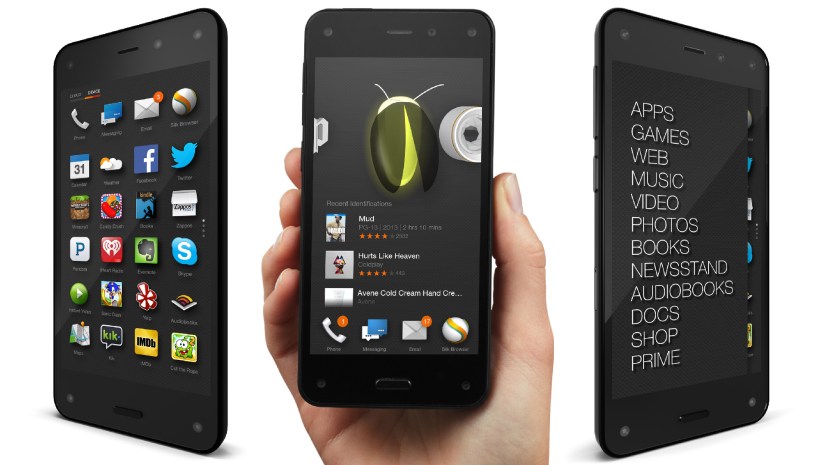 Amazon has made a success of its Fire tablet (though not without some friction with Google), particularly as budget-friendly devices for families. It has also succeeded with its Fire-branded set-top boxes and dongles. By contrast, its Fire Phone barely lasted a year before it was culled, in part because it lacked a comprehensive pool of apps (including Google’s).

Fork in the road

Huawei will undoubtedly have to launch its own operating system, something it has been preparing for a while. The system will probably be based on Android so it can support the millions of Android apps out there, but Huawei will need to do a better job than Amazon of getting third parties to put their apps in its app store. Even if it succeeds in doing that, something it has reportedly already been working on, it will have one more huge obstacle to overcome.

Huawei phones won’t have access to any of Google’s native apps, such as Maps, Gmail, or YouTube. And because the U.S. trade ban doesn’t only implicate Google, other U.S.-based service providers, such as Facebook and Twitter, likely won’t be available through this store either. So Google is still in a strong position from an Android perspective, but the aforementioned factors — ranging from EU regulation to U.S. trade blacklists — could eventually take their toll.

Also, other phone makers will look at Huawei’s predicament and recognize that the same thing could happen to them. Chinese companies, in particular, will observe recent events with caution, but it could serve as an impetus for companies such as Samsung to push ahead with efforts to escape Google’s stranglehold. The impact such shifts would have on consumers isn’t clear — the last thing the world needs is more fragmentation, with countless Android forks, app stores, and more. If Google’s version of Android brings anything, it’s consistency of access across devices.

It would actually make a great deal of sense for all the big handset makers to form a consortium and develop their own Android fork and/or app store that works across their respective devices. That would go some way toward freeing them from their reliance on Google while encouraging app developers to join in. But that isn’t likely to happen anytime soon — for starters, Samsung and others probably don’t want to align themselves with Huawei.

But make no mistake: As the U.S. tries to curtail Huawei, Google has very much been caught in the crossfire — and it has everything to lose.