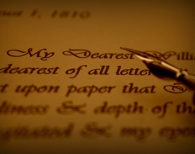 Courtships anchored by formal letters seem so 18th or 19th century, but with Microsoft and Yahoo, they’re apparently still very much in style.

On Saturday, Microsoft issued a letter demanding that Yahoo begin formal talks about the initial acquisition offer (our coverage). Failure to comply would result in the deal being taken directly to Yahoo’s shareholders at a reduced value. Tomorrow, Yahoo is expected to issue a letter in response with a similar refrain to its last letter to Microsoft (when it initially rejected the acquisition offer): You undervalue us.

Yahoo is not opposed to a deal but wants Microsoft to make a better offer, a source tells Reuters. This kind of talk surrounded the initial offer as well (our coverage).

Yahoo’s directors were in last-second talks on Sunday to discuss Microsoft’s latest maneuvers, The Financial Times reports. This is hardly surprising. Mere rumors of Microsoft thinking about pulling its bid caused Yahoo’s stock price to plunge in after-hours trading on Friday (our coverage). The ultimatum issued on Saturday could have an even worse effect on the company’s stock without some kind of response from Yahoo.

That response will still do little to save Yahoo. The company need actions, not words.

Depending on the wording, perhaps Yahoo is simply hoping Microsoft will open its wallet a little bit more — something it claims it would not do. Yet, if it gets the deal done quickly and peacefully, don’t be surprised to see a small raise in the offer.

Otherwise, Microsoft seems content to make a move to replace Yahoo’s board of directors with nominees of its choosing (our coverage). At that point the deal will be all but done. Yahoo is running out of time.