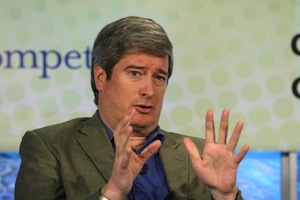 Spanfeller spent eight years at Forbes. He received credit for the site’s impressive traffic growth, but he was also criticized for sacrificing quality in his quest for pageviews. Spanfeller’s new company, based in New York, plans to create a number of websites on different topics, starting with a food website. More details about the site are supposed to come next month, followed by more launches in 2011.

The funding was first reported as in-progress by AllThingsDigital in June, but today was the official confirmation Spanfeller finished raising the money. The round was led by SoftBank Capital NY. Greenhill SAVP, RRE Ventures, and Lerer Media Ventures also contributed. The last two firms are also investors in Business Insider, another popular website that’s not afraid to get a bit shameless to boost pageviews.