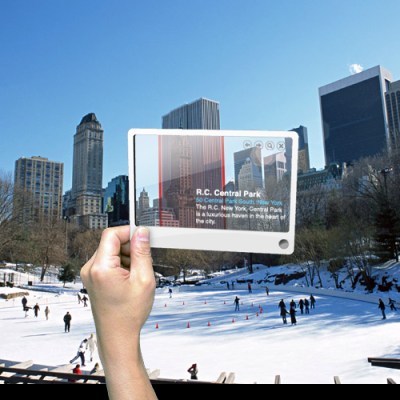 Augmented reality overlays digital information over your view of the physical world in a mobile device’s camera view, as pictured left. It currently works by using a combination of the mobile phone’s camera, compass, GPS data and other sensors to identify objects in the field of view, retrieve relevant data and overlay that data over the camera view. For example, you could point your camera at a building to get information about apartments for sale or the history of the building.

The Forrester report says that AR requires object recognition on the mobile device itself as well as 3D rendering to superimpose images on the real world and that only a few companies like Metaio and Total Immersion provide this. Visual search like Google Goggles and GPS browser-based experiences such as that provided by Layar don’t meet that definition of AR.

Forrester also concludes that AR is not yet scalable or mature. VentureBeat highlighted some of the problems (and possible solutions) with mobile AR technology at the start of 2010. Thus far, few consumers are using the technology. Layar is ahead of the pack with 1 million active users, while Metaio’s Junaio mobile AR solution has been downloaded 500,000 times.

Mobile AR will merge with other technologies like location-based services, visual search, image and facial recognition and barcodes, predicts Forrester. In fact this already started to happen in 2010. In February we saw an application called Recognizr which combined facial recognition with AR to recognize people and pull up profile information. Both companies involved in Recognizr were acquired in 2010, facial recognition company Polar Rose by Apple and interface specialists TAT (The Astonishing Tribe) by Blackberry-makers RIM. Metaio combined visual object search with AR so you can point your camera at everyday objects and get information about them. More recently, we saw the wonderfully useful WordLens which translates Spanish text to English (and vice versa) in the camera view in real time.

In spite of these provisos, Forrester is optimistic on the future of mobile AR and expects more blue chip companies to join the AR fray in 2010. Currently the space is dominated by startups. The report points out that Qualcomm opened an AR research center. And eBay classifieds recently partnered with Metaio.

Funding for mobile AR companies in 2010 went mainly to Layar (which did two rounds, 3.4 million in February and 14 million in December) and gaming companies like Tonchidot which received 12 million.