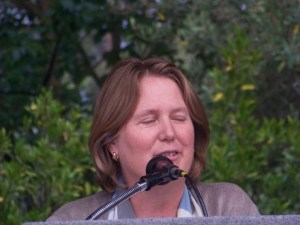 Diane Greene was ousted as chief executive of VMware today.

Just a few weeks ago, Greene was beaming with pride when she received a “visionary award” from the SD Forum. Her chief scientist, Mendel Rosenbaum, introduced her as proof positive that you don’t have to be a jerk to be a successful CEO of a multibillion dollar company.

Things can change fast. VMware announced today that Greene has been replaced by former Microsoft executive Paul Maritz as president and CEO. Joe Tucci, CEO of EMC, which owns a big stake in publicly traded VMware, said in a statement that VMware is in a position to extend its lead in virtualization, or the ability to run more than one operating system on the same computer. Virtualization has taken the server world by storm because it enables much more efficient use of a fleet of servers in a data center.

This change is rich with irony. Microsoft just began its frontal assault on VMware with the launch of Windows Server 2008 Hyper-V, which was in the making for years. Now Microsoft will go head to head with Maritz, a former key architect of Microsoft strategy and the guy made famous in the government antitrust case against Microsoft for saying in an email the company should cut off Netscape’s air supply.

Maritz retired from Microsoft in 2000 and comes to VMware via Pi Corp., a cloud computing start-up which he founded in 2003. EMC bought Pi Corp. in February, and Maritz became head of EMC’s cloud division. There was no hint in the release about why Greene was removed. The company said it expects revenues for 2008 to be modestly below the previous estimates of 50 percent growth over 2007.

It’s never a good sign when a founder leaves a company, particularly when it’s someone like Greene, who did so much to shepherd VMware through its early years, its acquisition by EMC for $600 million in 2004, and then its initial public offering in 2007 that raised billions of dollars. But it’s a turbulent year with a tough economic environment. It’s easy to see how stability at the top can be fragile. Greene lasted for a decade, far longer than most founders do.

Rosenbaum credited Greene with establishing the culture of VMware and recognizing the value of virtualization technology. Greene said that she persevered, even when the company was sold to a big storage firm, and that she was allowed to let VMware grow “unfettered.”

“The last chapter remains to be seen whether we will be allowed to pull off a full spinoff,” she said. “I hope so.”